I know, it's not exactly timely to post about Halloween in mid-November. But I just got these pictures off my sister's camera, and I thought you all (particularly those in areas without seasons, or whose seasons occur at opposite times of the year from mine) might appreciate some fall-foliage pics.
We have five trees in our backyard --- a maple, an ash, two oaks and a black walnut. The maple is the most spectacular: 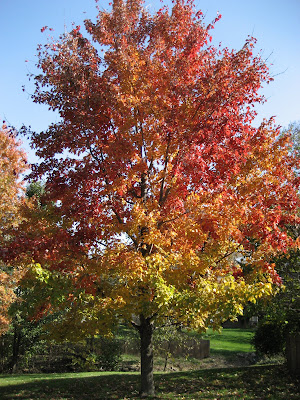 Also, every year I carve at least one pumpkin, usually a lot more. Last year, I carved five or six of them at my boyfriend's house (actually a group home for developmentally disabled adults where his roommate worked --- she and I together carved 10 or 12, and placed them out for the residents to admire). Then I came home and carved a likeness of Darth Vader for my own doorstep. (That was a great year!)

This year was nothing like that: I did two, and fairly simple designs, although one was fairly time-consuming, since I had to peel off the skin on all the teeth: 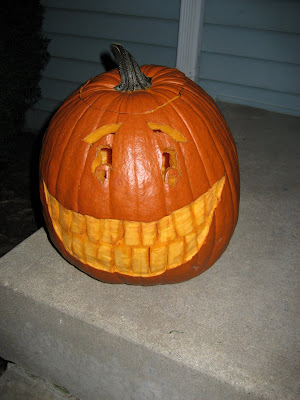 Here I am with both of them, which I named Mr. Teeth and the Zombie Pumpkin. (Yes, I always name at least one of my pumpkins --- last year featured El Gordo, Darth Pumpkin and the Imperial Gourdsmen). You can probably tell which one Mr. Teeth is.

That is beautiful. I didn't realize Kansas even had seasons.

Thank you for setting me straight on ABFH's blog about Brave New World. I always get them confused, as we were assigned the readings about the same year in School. Michael Savage, I believe, was the hero of BNW, wasn't he?

I hope to come back to your blog. My son was also diagnosed PDD at age 3. He is 14 now. Autism Hub has been a real blessing to me. It was at the time a "Brave New World" I entered into. No curebie shit, not a bit of mercury. ACTUAL ADULT AUTISTIC PEOPLE, I had heard they existed...

We lived in Western Kansas, Rozel, 10 years, my mother and mother-in-law were born in Damar and Toganoxie, respectively. (Small Towns you've never heard of I imagine.)

You're right, I don't know those towns. I think I've heard of Tonganoxie, MO, though. In fairness, I do live on the far eastern edge of Kansas, and am originally an Iowan (10.5 years, followed by 13.5 here).

I've had a cursory look at your blog, too. Very interesting; I've met a lot of neurodiverse people online who homeschool.

To Anonymous: Yes, we have seasons. Usually fall is not this spectacular, since we're usually drier over the summer and the leaves just turn brown and wilt, and we usually don't have much of a winter. But we do have them.