While perusing some old pulp magazines from the 1930s, mostly of the true-crime variety, I ran across a couple of ads that stopped me right in my tracks with their hilarious zeitgeistiness.
They were both for books; books which I imagine have vanished in the mists of time.

First, this one, for what seems to be a sex book of the "marriage manual" subtype: 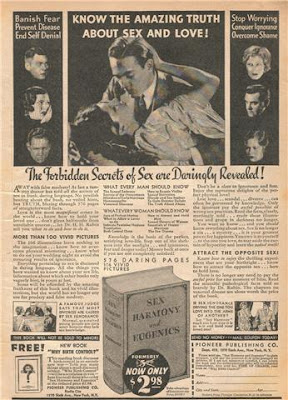 Notice the title of the book: "Sex Harmony and Eugenics."

(You can find a clearer image of an ad for the same book, with some of the same text, on the last page of this reprint of a 1937 "Modern Mechanix" article. One thing that differs between the two is the identity of the book you get for free with your order of "Sex Harmony and Eugenics" --- in the ad pictured above, you get "Why Birth Control?", while in the ad from "Modern Mechanix" you are offered the expansively titled "Philosophy of LIFE," which is described as a frank discussion of "the difference in construction and function of man and woman.")

The above ad, besides astonishing me with "Eugenics" as apparently part and parcel of the sex ed of its day, also amused me with its purple prose about "The Forbidden Secrets of Sex" and the alternately swoony and disapproving faces in the accompanying photo.

Away with false modesty! At last a famous doctor has told all the secrets of sex in frank, daring language. No prudish beating around the bush, no veiled hints, but TRUTH, blazing through 576 pages of straightforward facts.

Some will be offended by the amazing frankness of this book and its vivid illustrations, but the world has no longer any use for prudery and false modesty.

Lost love ... scandal ... divorce ... can often be prevented by knowledge. Only the ignorant pay the awful penalties of wrong sex practices. Read the facts, clearly, startlingly told ... study these illustrations and grope in darkness no longer.

There are also two (separate, of course) lists of what the author thinks "EVERY MAN SHOULD KNOW" and "EVERY WOMAN SHOULD KNOW." The men's list features such items as The Sexual Embrace, Secrets of the Honeymoon, How to Regain Virility, Glands and the Sex Instinct, and Sexual Starvation, while the women's list includes How to Attract and Hold Men, Intimate Feminine Hygiene, a Birth Control Chart, What to Allow a Lover to Do, and the requisite horror stories on Prostitution and Sexual Slavery of Women. In other words, men learn how to perform sexually (and, with the chapters on "sexual starvation" and regaining "virility," they learn that they are expected to perform sexually, whenever presented with the opportunity) while women learn that they are to be sexual gatekeepers, "allowing" lovers to do only what Good Girls Do, and shouldering all the responsibility for birth control and proper mate selection while making sure to stay attractive and receptive enough to hold the man's interest.

I was able to find pages from this book on the Eugenics Archive website, and I think this image taken from there illustrates perfectly the book's attitude toward women's sexuality: 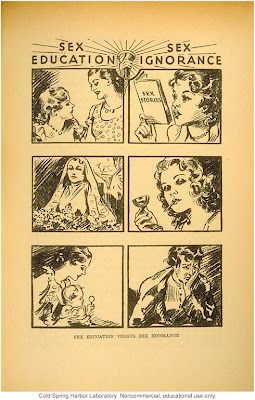 The woman who is truly educated about sex, y'see, doesn't endeavor to find out anything for herself, by reading novels or erotica or seeking out sexual experiences. No, she is content to let her mother tell her everything she needs to know, and to remain a virgin until marriage and then dutifully have procreative sex with her eugenically-approved husband.

Good to know that, then as now, talk of liberated, informed sexuality is really only meant to apply to one gender.

I think it's very important to remind people how popular "eugenics" was in the past. Things don't just "happen".

I so love this!
I'v been collecting vintage books and magazines for a long time, and I've got a whole bunch of old sex-educational books, too.
They give a great insight into history, and it's really interesting to see how the Third Reich changed attitudes towards everything, the books from the Weimar Republic are so progressive, and those published in postwar Germany show that huge lapse into the dark ages, while hypocritically claiming to be modern.

I have a different perspective on the "Sex Education vs Sex Ignorance" poster. It looks to me as tho' the point is that if you know the truth about sex - i.e., learn from someone who knows, not from reading fiction - you will make informed decisions. The fact that the poster also was made by someone who prefers sex in marriage is almost immaterial to that important point.