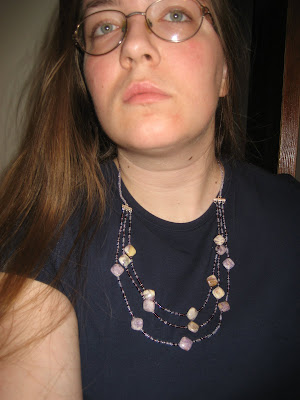 (A bigger version of the picture I'm currently using as my userpic)
Here are some pictures of a necklace I made (and have listed on my Etsy) featuring beads made of cut and polished agate. 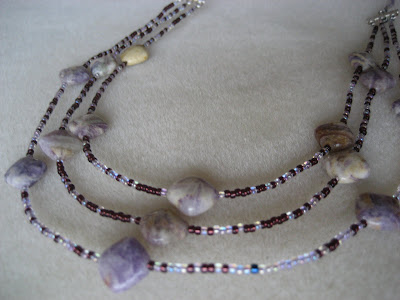 Those beads caught my eye because, while at first they just seem to have different shades of purple in them, if you look closer you can find swirls of brown, yellow and green too. 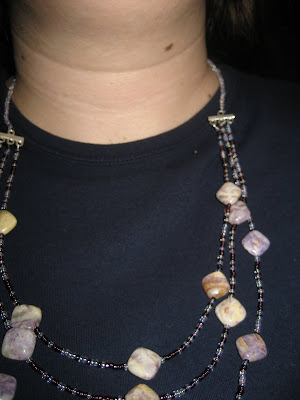 (When I bought them from my local bead store, the receipt actually said "crazy agates." I thought that was kind of funny --- do they also have Irascible Quartz*, or Melancholy Marcasite? I tried Googling the phrase, to see if that made anything clearer, and only found references to "crazy lace agate," which these might or might not be. The crazy-lace agates I could see on the internet tended to have, er, lacier patterns than these do). 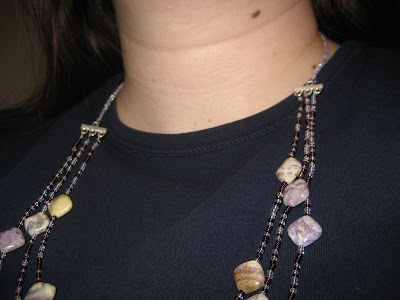 ... And here's a picture of me wearing the necklace with an outfit that actually complements it, as opposed to just being a dark background: 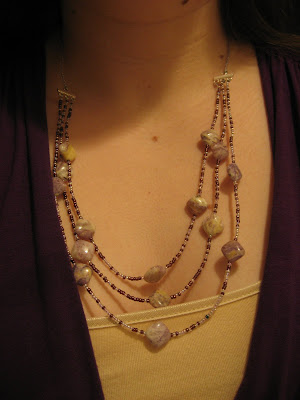 (The light in that one sucks for seeing the color of the stones). 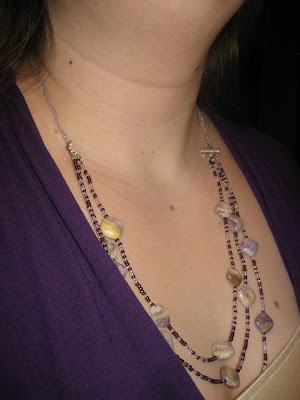 *As soon as I had that thought, I decided I *wanted* some Irascible Quartz. It is very beautiful in my imagination: little clusters of crystalline spears, colored a deep, lurid red like some unholy cross between blood and lava, with black streaks and fine metallic filaments shooting around the inside. It might even glow.
Posted by Lindsay at 12:49 AM

Me, I like hematite, also called "Alaskan Black Diamond". I have a large cut hematite stone in a sterling silver ring. It's like a naturally pure iron ore/steel.

Cool, 'cause I used to work at an iron ore mine. At one time, I had a large collection of "Fool's Gold" I had found there. Still iron, in a different form.

Those are lovely. You have a good eye, and I know how difficult it is to try to line those suckers up.

And they pathologize autistic children for lining up their toys! This kind of art is the very thing they'd be good for doing! That necklace looks awesome. I have a large collection of quartz rocks myself, including this one opal-shaped rock that I can definitely imagine on a necklace.

My sister makes necklaces out of semiprecious stones, too. She gave me two when she was visiting during the Olympics. I have no idea which stones she used, since the words went by so fast, but I remember one of them was jade.

That looks like it must have taken a really long time! Those necklaces are gorgeous, you have wonderful talent.