Through a (Brain) Scanner, Darkly

EXECUTIVE SUMMARY: In the August 11 issue of the Journal of Neuroscience, Christine Ecker and her colleagues at the Institute of Psychiatry at King's College in London describe a new tool they've developed for finding differences between autistic and non-autistic brains that go beyond "x brain structure is bigger/smaller in autistic people"; their method takes into account overall patterns of gray matter structure and organization. Their tool not only identifies these subtle, pervasive differences, it also "learns" them, using them to classify individual (computer models of) brains as autistic or not-autistic. The tool works quite well for that kind of classification, doing significantly better than chance on almost all its individual components, and reaching 65 to 85 percent accuracy as a whole. It can also distinguish between autistic brains and some other kind of non-neurotypical brain, in this case ADHD.
___________________________________

Apart from this brief mention on Amanda's blog, I hadn't read anything at the time about the new multidimensional brain scan described last month in the Journal of Neuroscience. I was intrigued, because one thing that's been awfully elusive to autism researchers is a consistent, reproducible biological marker that's specific to autism.
There've been some hints of neuroanatomical differences between autistic and non-autistic people in previous studies, but those differences --- in, say, the size and activity of the amygdala, the size and shape of the hippocampus, the size of the cerebellar vermis, the distribution of gray matter and white matter, the density of certain cell types within the cerebellum, the thickness of the cerebral cortex, or even in the overall size of the brain --- don't always show up when researchers look for them, nor do they always show up in every member of the (very small, carefully selected and usually quite homogeneous) group of autistic people being studied.
The authors of the recent study --- Christine Ecker, Andre Marquand, Janaina Mourão-Miranda, Patrick Johnston, Eileen M. Daly, Michael J. Brammer, Stefanos Maltezos, Clodagh M. Murphy, Dene Robertson, Steven C. Williams and Declan G. M. Murphy --- suspect that there might be a broader, more pervasive pattern of altered brain structure that underlies all the different, highly variable, changes to individual structures within the brain that are sometimes seen in autism:

[R]eports of region-specific differences in ASD are highly variable [for review, see Toal et al. (2005) and Amaral et al. (2008)]. Such variable findings may simply be explained by confounds such as clinical heterogeneity between studies, or analytical techniques. Alternatively, variability in findings may indicate that differences in brain anatomy in ASD are relatively subtle and spatially distributed, and are difficult to detect using mass-univariate (i.e., voxelwise) approaches. Last, given the multiple etiology of ASD, it is likely that its neuroanatomy is not confined to a single morphological parameter but affects multiple cortical features.

To try to find out what kinds of subtle, structural differences might characterize the brains of autistic adults, the researchers scanned the brains of twenty autistic men*, twenty men without any psychiatric, neurological or developmental disorders, and nineteen men without autism but with ADHD (to provide a non-autism, but also non-neurotypical, control group to try and isolate neuroanatomical variations particular to the autism group), used the MRI data to create three-dimensional computer maps of each subject's brain, and then fed the values of five different measurements taken at each vertex of the computer model (which is made of tiny triangular facets meant to approximate the brain's curved surfaces) into a statistical-analysis algorithm called a Support Vector Machine, which Neuroskeptic describes much better than I could in this post.
The five things they measured at each vertex of their virtual mock-brains are as follows: average convexity/concavity of the cortical surface (i.e., the distance between the cortical surface at a given vertex and where the cortical surface would be if the brain were smooth); cortical thickness; mean (radial) curvature (i.e., the radius of the circle that could be drawn underneath the curve of the cortical surface); metric distortion or Jacobian, which is the ratio of the areas of the triangular facets making up the cortical surface and the gray/white matter interface; and the pial area, which is the average area of the triangular facets touching each vertex.
Since some of these things are very hard to visualize, here's a diagram: 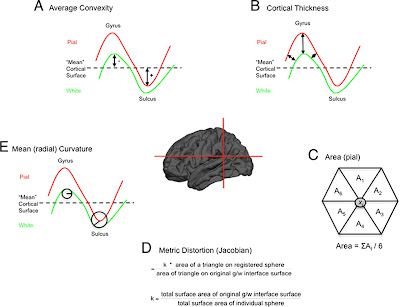 Figure 1, in Ecker et al. (2010)
Overall, this five-parameter model works pretty well at predicting who is autistic** and who isn't, though I was surprised to see how much its accuracy differed from one side of the brain to the other. On all measures, there's a huge gap --- a gap of 20 percentage points or more, in all but one instance --- between the two brain hemispheres in terms of a given measure's accuracy (i.e., its ability to sort all subjects into the correct category), sensitivity (ability to correctly identify autistic subjects --- i.e., having a high number of true positives and a low number of false negatives) and specificity (ability to correctly identify non-autistic subjects --- i.e., having a high number of true negatives and a low number of false positives).
For whatever reason, the left hemisphere much more than the right showed consistent neuroanatomical differences between autistic and non-autistic subjects.
Here's a classification plot showing the two categories as determined by applying the five-variable classifier to the left hemisphere: 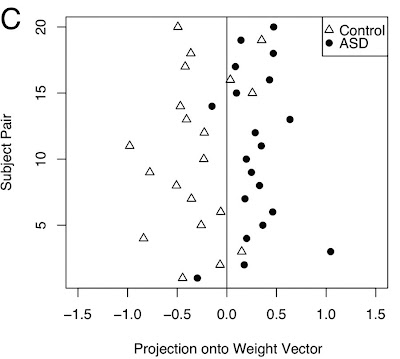 Contrast that with the right-brain results --- 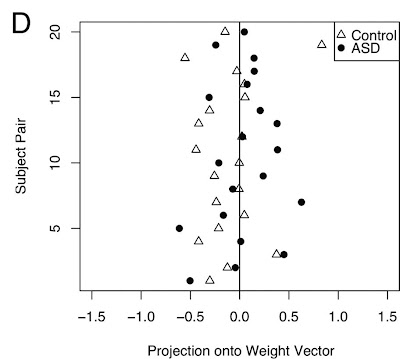 --- where you see a lot more crossover between categories, plus several subjects straddling the border line. It is also only in the left hemisphere that any correlation is observed between how far to the right of the dividing line a person is and their ADI scores in the social and communication domains.

Some parameters also performed better than others: cortical thickness had the highest accuracy levels of any parameter (90% in the left hemisphere!), followed by metric distortion.

Finally, in the left hemisphere the model also succeeded in distinguishing ADHD subjects from autistic ones. (In the right hemisphere, it placed about equal numbers of ADHD subjects in each category). That's important because it shows that the model is actually picking up on characteristics of autistic brains, instead of just registering all deviance from "normal."

So, what *ARE* these characteristics of autistic brains? Well, they vary by region --- not only in terms of which parameter is relevant, but also in terms of how autistic people differ from neurotypicals on a given parameter.

For instance, if you look at this map of how the autistic subjects' brains differed from the controls in terms of cortical thickness, you can see that some parts of the brain (mostly on the temporal lobe) tend to have a thicker layer of gray matter in autistic people, while in other areas (mostly on the frontal and parietal lobes), the cortex tends to be thinner in autistic people. 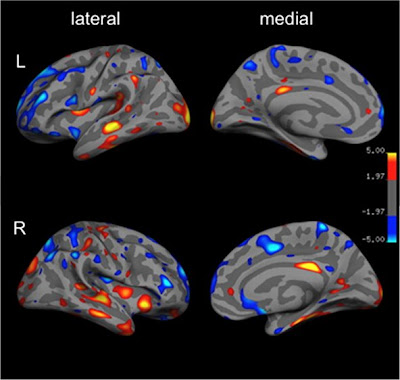 Some of the areas that showed up as having an "excess" of gray matter surprised me, as differential activity in those areas (fusiform gyrus, superior temporal sulcus) had previously been theorized to underlie autistic "deficits" in making sense of faces.

Besides these differences in amount of gray matter, there were also some strong differences in gray matter geometry: first, the autistic subjects showed greater sulcal depth in two regions --- the intraparietal sulcus and the superior frontal cortex --- and second, the inferior parietal lobes and certain regions in the right frontal lobe --- the right supramarginal gyrus, postcentral gyrus, and orbitofrontal cortex --- along with the precuneus, showed different patterns of cortical folding. 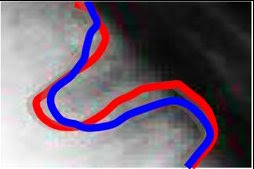 I would like to point out, again, that it's not necessarily any single variation at any one region of the brain that this statistical analysis has tied to autism, though --- it's a pattern of gray-matter distribution. It's also a pattern that's so far only been observed in a tiny, rather homogeneous sample of autistic men --- much larger, broader-based studies of this classifier need to be done to see if the same patterns hold up for all of the people currently lumped together under the category "autistic," or whether separate neuroanatomical phenotypes will define autistic subtypes.

I would also like to see future studies done using different diagnostic tools to define the autistic group --- if the goal of this research is to establish a biomarker for autism diagnosis so that we can finally be done with frustratingly ambiguous diagnosing-from-behavior, it will hardly do to have the biomarker be dependent on one of the older behavioral diagnostic tools for its template!

*According to this table showing demographic data on the autistic and control (but not the ADHD) subjects, the autistic subjects were mostly young, and some middle-aged, men (the average age (33) was much closer to the age of the youngest person (20) than it was to that of the oldest person (69)) and had a very wide range of IQ scores as measured by the Weschler Abbreviated Scale of Intelligence. The standard deviation, for full-scale IQ and for verbal and performance IQ, was around 20 points for the autistic group, and scores ranged from 76 (just one point over the cutoff point the authors chose to designate intellectual disability, which is a full-scale IQ of 75) to 141, with verbal IQs ranging from 78 to 133 and performance IQs from 77 to 138. These subjects, I'd like to point out in the spirit of adding to Michelle Dawson's recent post on functioning levels, were all defined as having Asperger's or high-functioning autism.

**Autistic subjects were determined to be such using either the ADI-R (for fifteen subjects), the ADOS (for five) or both (two).

Overwork and exhaustion can lead to funny stuff, now and then! :D