... if you're looking for one of those, I can direct you to this one by Neil Kapit, a fellow X-fan and author of the webcomic "Ruby's World," who pretty much says what I would say if I were to review this film.

I was very surprised to see her in this movie, because 1) she's a very recent character, and wouldn't really belong in a story about the relationship between Professor X and Magneto as young men (not that that's stopped any of the previous movies, where characters from different generations of X-Men have always been thrown together willy-nilly), 2) none of the other characters*, or plotlines, she's involved with make any appearance in this movie, and 3) she's very unphotogenic. She's half-girl, half-fly, and her offensive weapon is super-acidic barf.

Here's what she looks like using that power in the comics: 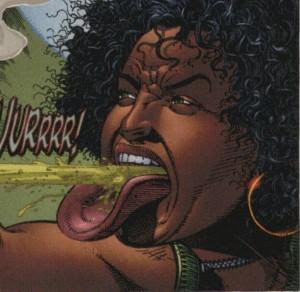 That's why I was so surprised, before seeing the movie, when I read that she'd be in it. Female characters in movies, especially in comic-book movies, action movies and other movies aimed at a teenage-boy audience, are primarily there as eye candy; when they're allowed to do cool stuff and look pretty it practically counts as a feminist victory, but the look-pretty requirement is not negotiable.

It turns out I underestimated Hollywood's ability to pretty almost anything up: I can't find any video on YouTube that includes this, but when the younger mutants are all showing each other their powers and picking out their X-Men codenames, Angel demonstrates something that looks nothing at all like what's pictured above. She strikes a pose, puckers her lips and releases a smoldering fireball about the size of a Ping-Pong ball, which arcs prettily through the air and lands on the statue's head, where it begins to corrode the metal**.

She uses this power again in a battle near the end of the movie; she's flying through the air breathing fire like a dragon. Less ladylike, but still not gross.

*Except Professor X, obviously, and also Magneto. Though the extent to which Magneto was actually involved in the events of Planet X are debatable ... the character who tried to suborn the Xavier School's "special class" into a reconstituted Brotherhood of Evil Mutants and conquer the world was apparently later revealed to be Not Really Magneto At All. I haven't read the comic where that gets hashed out, though, so I am quite fuzzy on the details. I just know that the whole question of "Does Planet X Count as a 'Magneto Story' or not is very contentious --- see the comment thread on this post.

**For whatever reason, the fireball-spewing part of Angel's power demonstration is missing from all the clips I can find.

Thanks for linking to my blog and my comic, Lindsay! Strongly appreciated.

I should also note that Angel Salvadore's name isn't a coincidence-- she's meant to be a clear parallel of Warren Worthington the Third, the first Angel. Except that while Warren is a rich brat whose powers make him as telegenic as a mutant can get, Angel comes from a lower-class family and has the aforementioned gross powers. There's also the racial aspect, as Warren was about as white as you could get (at least until Apocalypse tore him apart and put him back together with blue skin and metal wings, giving him an eerie look that actually made me like the character), while Angel is Hispanic.