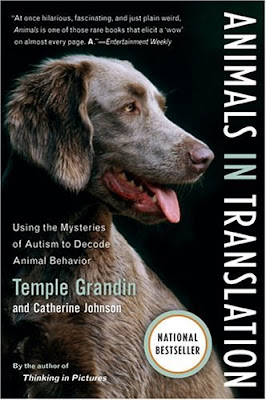 While poking around Science Daily, I came across this article summarizing a recent essay in PLoS Biology disputing the central thesis of Temple Grandin's Animals in Translation --- the idea that animal cognition and autistic human cognition share an ability to "think in detail," to perceive consciously (and remember) all the raw sensory data that normal humans' brains filter out and replace with a simplified mental construct. (An example of this tendency would be what happens when you look at a field of grass --- or a beach, as in the example given in the article. Odds are, you don't register every individual blade of grass or grain of sand as you walk along; you just notice grass or sand. For Grandin, for me and for most, if not all, autistics, these vistas that seem boring and uniform to an NT person are as dynamic and heterogeneous as a crowd of people appears to that same NT. We see each part individually, note the movement of each blade of grass in the wind, or the glare of each grain of sand in the sun).

Grandin had posited in her book that many animals shared this characteristic --- that birds, for example, used this amazingly detailed visual memory to remember where they had hidden food caches, or that horses and cattle might panic at the sight of some intense visual signal, like a brightly colored T-shirt flapping in the wind, that most humans would not even register. While the authors of the article (Giorgio Vallortigara, Allan Snyder, Gisela Kaplan, Patrick Bateson, Nicola S. Clayton and Lesley J. Rogers) do not dispute that animal intelligence can involve this kind of specialized storage of massive amounts of sensory data, they disagree that all animal cognition is like that. They reference studies done on pigeon perception and intelligence, and found that pigeons (and other birds) are capable of both holistic, gestalt-type "global" perception and detailed, piecewise "local" perception. They also observe that animals with the capacity for prodigious spatial memory do not ever seem to experience sensory overload, nor do they show "deficits" in other areas of cognition or behavior*, both of which they identify with autism in humans. Other discrepancies they find between animal brains and autistic human brains are the intact mirror-neuron systems** that have been found in some animals, and the lack of a relationship between social behavior and intensive use of spatial cognition. These things lead them to decide that certain animals' highly-developed use of visual and spatial perception and memory are not so much features of a larger cognitive style as they are specific adaptations to each kind of animal's environment and lifestyle.

Temple Grandin has also written a response to this article (it's in the green box embedded in the article's text), in which she says that more study is needed to verify Vallortigara et al's claims about the cognition of spatially-gifted animals; specifically, she would want to test their abilities in areas related to but distinct from their particular skill, to see if that skill is "hyperspecific," or restricted to a particular context, which she claims would make it more like an autistic savant's skill.

*I don't think every autistic savant necessarily has "deficits" in skills that are not his or her savant skill; Daniel Tammet is one example I can cite right off as a savant who is also thought to have a high level of general intelligence. I think the defining characteristic of a savant would be the highly developed, hyperspecific "islets of ability," regardless of the person's level of ability in other areas. I think the stereotype of the "idiot savant" might lead people to notice savantism more in people with profound impairments in other areas, and also that those instruments we have to test intelligence are so narrowly specific to one type of intelligence that it is reasonable to suppose that it would tend more often to fail to identify intelligent people whose minds work in unusual ways, like savants.

**At some point I intend to do a post on mirror neurons. They're the Latest Thing in autism research, but I'm still not sure there's any there there.

It strikes me that the idea of "autistic human cognition" being similar to "animal cognition" has several major flaws in it:

1) an incredibly human-centric view, where one subgroup of one species gets compared to the entire category of "non-human animals", which is kind of like saying "Birmingham is similar to non-UK countries" in scale terms, only probably a *much* bigger dissonance - are animals as diverse as frogs, cows, centipedes, lampreys, hoatzins and octopi all more like autistic humans than like non-autistic humans?

Autistic cognition is just as much "human cognition" as neurotypical cognition. We are all members of the human species. I don't really understand why Grandin and her autistic supporters don't see the incredibly blatant dehumanisation of autistic people that her argument basically equates to...

Yeah, both of the points you raise bothered me, too.

On the subject of "animal intelligence" --- a category so broad as to be meaningless, and one that I think only exists because human scientists and philosophers have such a long history of categorically denying that any nonhuman animal could be "intelligent." So now, animal researchers are saying, "Yes they can! And here are some examples of different kinds of animals displaying different kinds of intelligence."

I do think most of the actual discussion is conducted in more specific terms, but it tends to be summarized in these unhelpful, overly broad categorical terms.

You know, now that I think about it, *THAT'S* something I'd like to see; a book giving cognitive profiles of different kinds of animals and humans, and identifying the domains in which the various subgroups overlap. Kick the dichotomous-thinking habit once and for all --- I think that's where the sinister overtones come from, when the dichotomy Us/Them is overlaid over others, like Humans/Animals and Autistics/NTs.

Shorter my other comment: I think Grandin is trying to promote the neurodiversity-friendly idea that NT humans do not have a monopoly on intelligence, but her bringing animals into the picture intersects in ugly and unintended ways with the history of privileged humans equating nonprivileged humans with "dumb animals" to justify their enslavement/oppression/genocide of the nonprivileged humans.

I think i agree with your second reply, but intentions don't always match consequences, and i tend to be pretty cynical/pessimistic about consequences.

I'll have to think a bit more about your first reply. The intersection of animal rights and human minority rights is always a thorny one for me (and complicated, of course, by the likes of Peter Singer, as well as issues like medical testing that tend to polarise them against each other)...

BTW, i passed this on to you: Blog Love

Another flaw in Grandin's idea is that not all autistics perceive visual details in the way she describes. I have considerably less than average capacity for visual perception and visual memory. Most of what I see registers as plain text and/or spatial information, unless I make a conscious effort to notice visual details. Where you see each blade of grass, and the average person sees a field of grass, I'm likely to remember the same landscape simply as a vacant lot, and I wouldn't be able to tell you if it had grass or weeds or just plain dirt.

But on the other hand, I didn't have any problems at all navigating through the Los Angeles freeway system in a rented car after not having been there in 15 years...