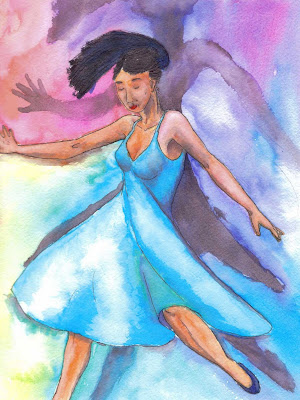 This is the same character I drew in my earlier Arty Aspie post. I revisited her for two reasons: first, that I wanted to do a painting that gave a better view of her --- the other painting is a top-down view, which shows her only as a skirt, a ponytail and a pair of outstretched arms. That made for an interesting composition, but I wanted to do a picture that was more about her. So here it is.

I also wanted, at some point, to find a way to render, graphically, the way in which I see the world --- the perceptual hyperacuity that characterizes my autism and makes my world such a vivid, dreamlike and sometimes scary place. This picture, with its colorful background, is a step on that path. Now, the trick is to incorporate that level of intense color and light/shadow contrast into a more detailed scene.

hey there, i'm just watching an interesting documentary on CBC national about people with autism. i don't know if you are able to find it online, but i just thought i'd let you know: http://www.cbc.ca/national/blog/special_feature/positively_autistic/positively_autistic.html