I just sent this picture to the Autistic Adults Picture Project: 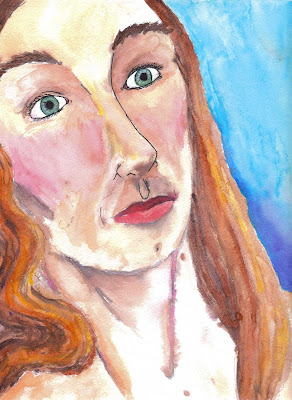 Actually, I sent several pictures (since Jypsy expressed a preference for a certain size photo; since mine are all digital, I sent her files of varying sizes --- 15 KB to just under 2 MB), though I did specify a preference that this be the one displayed, if it were at all feasible.

This is the best self-portrait I've done so far; I'm still not totally satisfied with it. I added the ink initially just around the eyes, since the eyelashes and eyelid folds got lost under the paint, which is a decision I stand by, though if I were to do it again I would not ink any of the other lines. I also think I got the texture of my hair mostly right on the right side, but on the left side it looks too much like brown spaghetti. The skin tone is pretty much right on, but the hair is too light, and I think the nose might be too long.

Also, in real life I wear glasses --- have done so consistently since age 11 --- but I hate drawing them and think I look prettier without them. So they do not appear in this painting.

Welcome to "A2P2" (The Autistic Adults Picture Project). You'll find a direct link to your page at http://www.PlanetAutism.com/AuSpin/lindsay1.htm