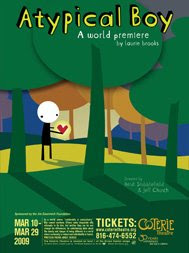 Apparently the Coterie Theatre (a children's theater in Kansas City) is putting on a play about a character who is different from other children and, try as he might, can't quite fit in.

From the "Resource Guide" on the play's webpage:

From the playwright: "Atypical Boy is a cautionary tale of a world that presents a comic anti-model of behavior. It is not intended to be realistic." The title character lives in a far away land where conformity is compulsory. Boy cannot conform. Others make desperately silly attempts to fix him, but neither they nor he can change his differences.

Labeled a "monster" by the others, Boy finds himself alone and disenfranchised in a world filled with monsters. In his exile Boy clashes with Hugo, ruled by his outrageous monster side, and is drawn to Girl, who struggles to remain human. At a point near the end of the play, the action will stop at the most unresolved point, and a 10 to 15 minute interactive forum will take place. At this point the audience can give the stage characters advice.

"While Atypical Boy does not mention TS or any specific disability, it uniquely addresses issues about acceptance, how we treat others, and forming relationships in an entertaining and thought provoking manner," said Jim Eisenreich, foundation founder and former Major League baseball player. "My hope is that every person who attends the play, whether they have a condition like TS or not, considers how our actions and words can both hurt and heal." 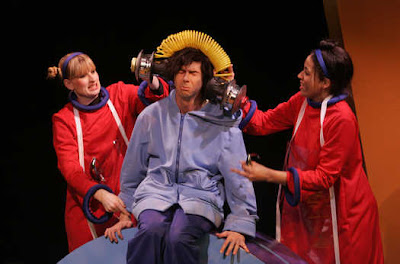 (Image taken from this review in the Kansas City Star).

In this scene, Boy is taken to a Behavioral Intervention Center and shocked in an effort to make him normal. Both the use of electroshock and the use of the phrase "behavioral intervention" call up autism-specific associations: the Judge Rotenberg Center in Massachusetts, where each student (many, but not all, of whom are autistic) is outfitted with a backpack-like device that will zap them whenever a staff member presses a button; early experiments using shock (and other "aversives," such as yelling, slapping, shaking or restraint) to try to train autistic children to act normal.

One thing I wonder is, why does only the monster have a name? He's named Hugo, while Boy and Girl are not named. That's interesting to me --- I can see that, in the world of the play, any expression of individuality --- of difference from others --- is monstrous; maybe the name is part of that. Embrace the monster, become too far removed from your fellow humans, such that you are no longer even one of them, and you become a perfect individual. You're the only thing walking around that looks, talks, or feels like you, so you're no longer a human, you're a (your name).

Atypical Boy will be performed at the Coterie March 10 through March 29, every day but Monday. Its Coterie run is the world premiere; maybe in a few seasons it will come to other cities in the US, too. It definitely sounds like a fun, interesting thing for autistic (or otherwise neurodiverse) families to go to; I'd urge Kansas City area parents to check it out!

What an interesting looking piece of theatre! Wish I could see it.

Wow!!
Are you trying to make it *somehow*?
(Even when it's difficult)maybe you can go with a friend, who drives.
This sounds really great, and you might later regret having missed it.

JEFF CHURCH
jchurch@coterietheatre.org if you wish to confirm coming!