Ack! I Forgot to Blog Against Disablism Yesterday!

Yesterday was the first of May, which had two immediate associations for me: May baskets and "Wolverine." But it was also Blogging Against Disablism Day, which I hadn't realized until I got on the Internet last night.
I've never participated in one of these mass blogging days before, since I usually can't think of anything to say on the topic when they're called, but this time I've got some disablism against which to blog.

First, there's the sidelining of the Community Choice Act, as ABFH has also mentioned in her BADD post. The Community Choice Act (H.R. 1670, S. 683) would amend Title XIX of the Social Security Act to remove what ADAPT terms the "heavy institutional bias" of its coverage rules for long-term care. 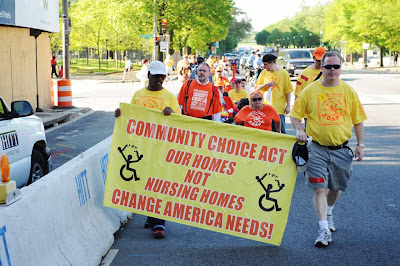 The act would revise Section 1902(a)(10)(D) of the Social Security Act (which currently just says that a state plan for medical assistance --- like, say, Medicaid --- should "provide for the inclusion of home health services for any individual who, under the State plan, is entitled to nursing facility services") to include "community-based attendant services and supports" as another alternative (besides the in-home care already specified) to institutionalization. It would also add a section detailing the regulation and oversight of such programs. (One of the features of that proposed section that intrigues me the most is its call for each state to create a Development and Implementation Council --- made up primarily of elderly and disabled people themselves --- to make sure the program works as it should).

Since one of the Obama administration's biggest priorities has been health-care reform, and since strengthening Medicaid had already been part of that agenda, you'd think the Community Choice Act would be part of that. Yet when a delegation of ten ADAPT activists met with a group of officials including Nancy-Ann De Parle, Director of the White House Office of Health Reform; Jeff Crowley, Director of the Office of National AIDS Policy and disability-policy advisor; Henry Claypool, Director of the Office of Disability in Health and Human Services; and Mike Hash, coordinator of joint White House-Department of Health and Human Services reform efforts, the activists were told that the Community Choice Act was not a priority for the current wave of reforms. 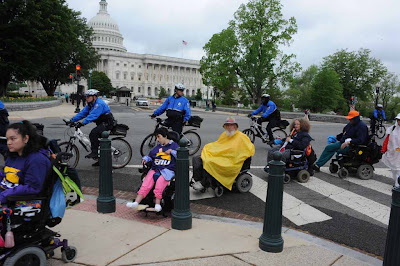 From the ADAPT Action Report of April 27th:

The administration stated that its only commitment currently is to extend insurance to the people who are uninsured, and that the people in nursing homes and institutions would need to continue to wait until an unspecified time in the future when it is proven that the health care reform worked. 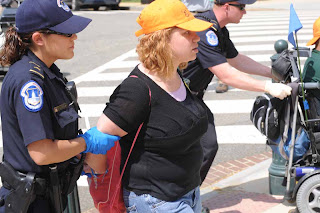 Hearing that, 500 ADAPT members gathered outside the White House, chanting and holding signs and banners. Some handcuffed themselves to the fence, and all were there in defiance of a police order not to protest on the sidewalk or near the fence. 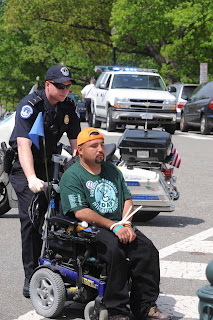 On the following day, the protest was moved to Capitol Hill, where activists blocked off Independence and Constitution Avenues and crawled up the Capitol steps.

99 were arrested on that day.

I also have an example of disablism at the local level, in the publicity campaign for a bill that's been kicking around the Kansas legislature for a few months now.

Dubbed "Kate's Law" after Olathe veterinarian and Kansas Coalition for Autism Legislation founder Michael Wasmer's young daughter, the Accessing Autism Services Bill (H. B. 2367, S. B. 12) would require health-insurance policies to cover autism treatments, particularly ABA, which had previously been denied coverage under a lot of plans due to its "experimental" status. Currently, the House version of the bill is pretty much dead in the water, having failed to win enough votes to be pulled out of committee and into general debate. The Senate version was tabled late in January; Senate Financial Institutions and Insurance Committee chairwoman Ruth Teichman cited the bad economy and a lack of information about the potential economic effects of expanding insurance coverage.

I have no problem with the law itself, and, indeed, think that whatever services people decide they need should be accessible to them. No, my gripe is with the oft-raised specter of Dire Consequences if any autistic child grows up without having had extensive behavioral therapy.

Here's an example of such scaremongering, from an April 28 Kansas City Star article:

There's no cure, but early intervention can teach autistic children the skills they need to lead productive lives.

Without therapy, many severely autistic people end up in institutions or relying on the government for help. The Autism Society of America, however, estimates that two-thirds of the cost of lifelong care for an autistic person can be eliminated through early therapy.

This is disablist rhetoric for a couple of reasons. The first reason should be fairly obvious: the article is saying that, without "treatment" of a certain type and duration, an autistic person's life will not be "productive." (In an aggressively capitalist, bottom-line-obsessed society like ours, such a prediction carries the additional connotation of moral worthlessness). The person is doomed to grow up a "useless eater," costing his family, state and country money.

Besides assuming the worst possible outcome, this line of argument also objectifies the autistic person. Nowhere are hir thoughts, feelings or desires mentioned, and hir (squandered) potential is alluded to only in bare economic terms. Hir life is discussed entirely in terms of its financial impact on the state. The moral imperative presented in this argument therefore has nothing to do with the autistic person hirself, but instead deals with minimizing the economic damage this person does simply by existing as ze is.

Finally, there's the disablism inherent in a political and economic system in which advocacy groups feel like they have to prophesy doom to get assistance from the government. Instead of saying, "Hey, some families want this, can we help them get it?" advocacy groups like Autism Speaks and the Kansas Coalition for Autism Legislation feel they have to say, "Without this, one in every 166 150 100 children in preschool now will grow up to be a DROOLING VEGETABLE and bankrupt their family! The economy will collapse, and there'll be RIOTING IN THE STREETS!! FUND THIS NOW!!!!"

I have to say I got a chuckle out of the last paragraph. It's unfortunately pretty accurate, though, that's exactly how they're always talking about autistic children (and autistic adults... and other disabled people... and...) it's all about the money. Even when we're talking about people. It's upsetting.

I have been vaguely aware there was a "blogging against disablism" thing going on sometime this month but wasn't sure exactly when it was. I don't have much to say on it right now so if I add anything to the event it'll probably be horribly late. Whoops.

I think it's really cool that you joined the BADD, even if it's late (like me!)
I also like how they're not being so petty about the exact date, considering people might have a bad day.

Thanks for explaining the Community Choice act in such detail, with links and all.
I've often had trouble understanding blogger's political subjects, because they often forget that not all their readers are US citizens and need to go into more detail (or provide links) about their countries legislation.

The other irony is that ABA does not even make an autistic that productive.
If we are allowed and encouraged to explore our talents instead of being taught to poorly imitate NT behaviour, society would benefit a lot more.

It is very interesting for me to read that article. Thank you for it. I like such themes and anything connected to this matter. I definitely want to read a bit more soon.