Do You See Autistic People?

Shiva has a really interesting post up, which he says was inspired by this earlier (also very good) post of AnneC's. They both post pictures of themselves as children, and talk about what they see in the picture --- Anne describes how her opinion of herself as she appears in the photo changed as she learned more about how other people saw her:

I'd liked the above picture until that day, the day my teacher yelled and my parents got called and I got lectured for academic and "behavior issue" stuff in addition to for my abysmal self-care skills. After that day, though, I hated it. I suddenly, having been jerked and jolted into raw self-awareness via humiliation, saw that picture and saw not a kid actually having fun looking at stuff on an interesting field trip, but a kid with giant ugly glasses and hair hanging down in dirty, matted sections. It was preposterous that that could be me. And yet it was. And I had no way to explain why or how I was "like that," or why I hadn't noticed so much [was] wrong, or why I couldn't seem to keep up with most of what people my age were "supposed" to be keeping up with.

--- and Shiva describes what he sees as clear, even obvious, signs of autism in his old photos.

I didn't see anything in them, myself --- if I hadn't known it was him, I'd have no reason to suspect the boy in the pictures of being autistic; to me, he seems too engaged with the photographer (and with his younger brother, who is also pictured) to trip my mental autism alarm. 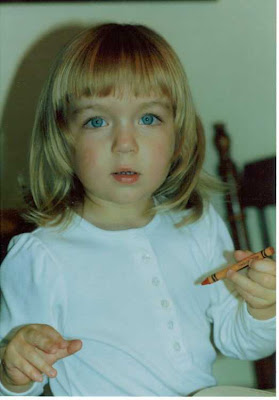 This is me, maybe three or four years old. I have a crayon in my hand; I've always loved to draw. (The crayon is Burnt Orange, which I've always thought was brown, not orange. I frequently quibble with other people's designation of ambiguous colors; my mom and I often cannot tell which of my items of clothing we're talking about, because we assign the same object to different color categories --- an indigo or blue-violet shirt will get called "blue" by my mom and "purple" by me, for example).

That "frozen" posture is typical for me, even now: if interrupted in the middle of something, I will often remain in whatever posture I was in when distracted. I also frequently bend my elbows and extend my fingers like that whenever I'm deep in thought.

Also typical of me, in early childhood, is the stare.

Here it is again: 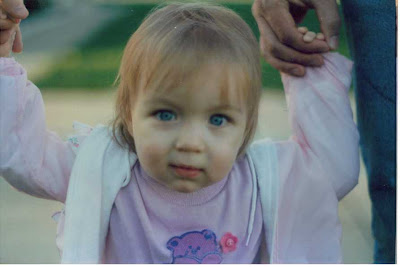 Because I perceive the things around me in such extensive, vibrant detail, I could quite probably sit and look at any given object forever. This gives me a particularly intense gaze, which in elementary school I learned under no circumstances to direct at another person, as it is rude and intimidating. (The result of that particular bit of behavioral engineering is that I now display the typically "autistic" lack of eye contact).

And here I am frozen in place again, this time at age fifteen, standing on top of a (short) mountain: 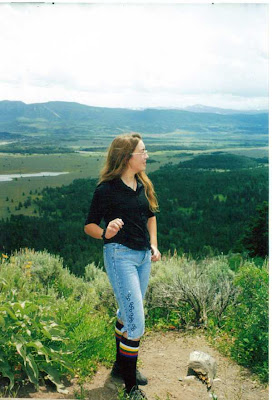 And there's that hand, hovering at waist height, fingers curling and flexing.

You can also tell I've started choosing my own clothes: note the emphasis on black, the colorful socks and (though I'm not sure how visible they are in this picture) the black sneakers tied with rainbow shoelaces.

Another typical posture for me is this one: 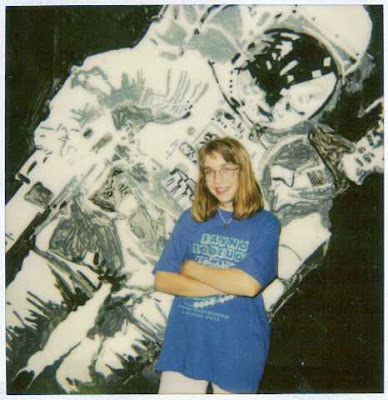 That's me in sixth grade, age eleven. The astronaut is in the background because I went to Christa McAuliffe Elementary School for a year and a half --- astronauts, space and "Reach for the Stars" were big themes there. My arms are tightly crossed over my stomach, and I am leaning slightly back, against the wall and away from the photographer. I stand like this often; it's a defensive posture.

(My posture in this picture is also pretty near identical to AnneC's in the picture she posted).

So, what makes a person appear "autistic"? I indicated in a comment on Shiva's post that I looked primarily at eye gaze: is the person looking at the camera? Do they appear conscious of the photographer, or of other people in the picture? To me, an obviously autistic person does not; they're staring off into the distance or focusing on a nearby object. Accordingly, the first picture I posted, with me holding the crayon, is the one I think of as the most autistic-looking of these.

I am indebted to Donna Williams's captioning of her own old photos in Nobody Nowhere for these ideas; that book was the first place I'd ever seen anybody look at photos with an eye to autism-spotting, and I don't know that I'd encountered it anyplace else before I saw Shiva's and Anne's posts.

Anyway, in that book Williams includes a series of pictures of herself growing up, with captions describing what she sees in each one. She describes herself, variously, as "star[ing] obliviously through the camera," "preoccup[ied] with a tactile, nonsocial world," and "clearly not able to be a part of things," in contrast to her older brother, who appears in many of the photos beside her, and whom she describes always as "relating directly to the person taking the photo" and, later, developing a "distance from, and lack of interest in" her as it became clear to him that she wasn't going to be a regular kid like him.

What an interesting topic. Thanks for bringing it up. Good post too.

I also tend to hang or "freeze" in place if interrupted in something... I don't know if most people do that or not. I don't really spend time around that many people so I have little chance to observe more than a few people's behavioral patterns.

There's a lot to think about brought up in this post, not just about pictures either.

WOW. That picture of you at 11 is *eerily* similar to mine (in terms of pose and expression and such), I saw the familiarity there before I even read the bit where you made the comparison.

This photo stuff is utterly fascinating. I don't want to draw any firm conclusions from it or anything (as the current data set isn't nearly enough to comprise a scientifically valid sample set) but there definitely seem to be patterns of commonality.

And I've also *just* started noticing those patterns in a LOT of my own childhood photos...it's the strangest thing, because I never really thought I looked anything but "normal" for ages, but now I've got this pattern-sensing algorithm loaded in my brain it's like I can see these subtle differences between how I am standing or holding my body or my expression and those of my siblings (who, while plenty weird, aren't autistic).

(And, if you're curious, I've got a bunch more photos up on Flickr in a set called Childhood.)

Oh, and one more thing: a ton of people have told me that (usually when I am trying to smile) that I am in fact "smirking". I wonder how common that is...

Oh, and regarding eye gaze: this picture, and this other picture and this picture too all show some potentially interesting gaze patterns.

There are some that I seem to be looking at the camera, (like here) but then again, my mother was a hobby photographer and was *very* into taking a zillion pictures until getting just the right one.

(Oh, and this one has my (non-autistic) brother looking away from the camera, just for reference. We don't need to perpetuate another stereotype, after all, wherein people are considered autistic if they look away and nonautistic if they don't! Not that you were doing that, I just wanted to point that out pre-emptively.)

And another thing I just thought of: I used to cross my arms over my chest a lot just because it was comfortable, and I remember people telling me "Stop doing that, you look defensive!" And I didn't know (or care, really) what "defensive" meant, so I just did it whenever I wanted and figured people were just being silly when they commented. :P

We don't need to perpetuate another stereotype, after all, wherein people are considered autistic if they look away and nonautistic if they don't!Oh, no. I had intended, but apparently forgot, to say that in most of my baby pictures I *AM* looking at the camera, or at another person in the picture.

(Also, that is an *AWESOME* drawing of Darth Vader! I can't believe you did that when you were ten.)

Yeah I did not think you were perpetuating a stereotype, just wanted to add that disclaimer in case someone else came along and tried to turn it into one (as I've seen that kind of thing happen -- someone makes a casual "oh, that's interesting" observation and then a bunch of people take it to mean it's a rule, and then things get annoying).

And, yes, I was *so* pleased with that Darth Vader drawing...I worked on that thing for *days*, and of course the teachers kept telling me to put it away, but they did not know the Power of the Perseveration Side!

What a beautiful little girl you were!

Just a note to say it didn't take JB long to find my post and leave a lengthy diatribe about how he's going to save the world from me.

The first pic reminds me a lot of a pic of my sister (as a toddler), where she holds a piece of bread in this very peculiar way (with stretched fingers), that is still typical for her.
Also I'm intensely jealous, that you went to a school named after a woman astronaut. Just how cool is that?
The pic of you in front of the space pic is just too awesome.
(The geek in me gets easily excited over space age everything.)