This post of Urocyon's, about zoologists who can't seem to stop describing animal behavior in terms that reflect the values and norms of one particular human culture*, reminded me of the chapter in Natalie Angier's Woman: An Intimate Geography about the ovum and how its role in reproduction is commonly (and wrongly) understood in terms of traditional Western conceptions of gender: Man acts, Woman is acted upon; Man creates, Woman nurtures, etc.

One of the more obvious, and literal, examples of applying this gendered binary to human reproductive biology is the understanding of conception shown in Book I of Aristotle's On the Generation of Animals:

That, then, the female does not contribute semen to generation, but does contribute something, and that this is the matter of the catamenia [menstrual blood?], or that which is analogous to it in bloodless animals, is clear from what has been said [earlier in the passage], and also from a general and abstract survey of the question. For there must needs be that which generates and that from which it generates; even if these be one, still they must be distinct in form and their essence must be different; and in those animals that have these powers separate in two sexes the body and nature of the active and the passive sex must also differ. If, then, the male stands for the effective and active, and the female, considered as female, for the passive, it follows that what the female would contribute to the semen of the male would not be semen but material for the semen to work upon. This is just what we find to be the case, for the catamenia have in their nature an affinity to the primitive matter.
...
[W]henever one thing is made from two of which one is active and the other passive, the active agent does not exist in that which is made; and, still more generally, the same applies when one thing moves and another is moved; the moving thing does not exist in that which is moved. But the female, as female, is passive, and the male, as male, is active, and the principle of the movement comes from him. Therefore, if we take the highest genera under which they each fall, the one being active and motive and the other passive and moved, that one thing which is produced comes from them only in the sense in which a bed comes into being from the carpenter and the wood, or in which a ball comes into being from the wax and the form.

This understanding dominated biology from the days of ancient Greece until the 18th century; some early biologists, like Nicolaas Hartsoeker, took this idea of sperm-as-seed/womb-as-flowerpot to its logical extreme of thinking there was a tiny person already fully-formed inside the sperm cell! (Hartsoeker is the one who drew the cute little sketch shown near the top of this post. There's even a little star inside its tiny head, which I'm guessing represents a soul).

Even once the actual mechanics of fertilization became known, and people realized that women's ova also contain genetic material**, there was still a tendency to describe the male and female gametes' roles in Aristotelian terms of passive, receptive egg and moving, active sperm. The sperm are said to compete against each other to reach the egg, thereby ensuring that the hardiest, best one goes on to develop into an embryo.

The truth is actually more complicated, and involves more of an interplay between egg and sperm.

I don't currently have Angier's book on hand --- my partner, a sometime anatomy teacher and amateur sex educator, is borrowing it --- but I do have my developmental-biology textbook from college, Scott F. Gilbert's Developmental Biology, Seventh Edition. It ought to include everything Angier mentioned, and probably more, too. 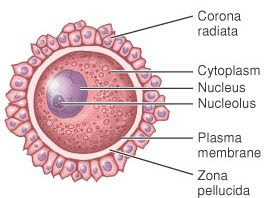 Anyway, four processes that occur in the egg stick out to me as giving the lie to the notion of the female gamete as an inert substrate, awaiting the action of the "winning" male gamete:

1) In order to find the egg at all, sperm depend on signaling molecules secreted by the egg, which allow the sperm to track where the signals are coming from and adjust their trajectories accordingly.

2) Sperm undergo a chemical transformation called capacitation once they've been in the uterus for a while, without which they're unable to pass through the cumulus, or layer of ovarian follicular cells associated with the egg. During capacitation, the sperm cell membrane changes composition: uterine proteins remove cholesterol, and some of the proteins and carbohydrates embedded in the sperm cell membrane are also stripped away. The membrane also hyperpolarizes (i.e., the difference in net electrical charge between opposite sides of the membrane becomes bigger), which somehow triggers a cascade of protein phosphorylations (which, as I've mentioned before, can either activate or inhibit a protein) which ultimately allows the sperm to recognize, bind to and fuse with the egg.

3) For the sperm to be able to release its genetic material into the egg, a protein in the egg's zona pellucida, or thick outer coating of glycoproteins, has to bind to the sperm and initiate a process called the acrosome reaction, which is a signaling cascade involving G proteins (I've written about them before, too) and a mass influx of calcium ions, set off by surface proteins on both sperm and zona pellucida weaving together, and which results in the release of the protein-digesting enzymes contained in the acrosomal vesicle. These enzymes bore a tunnel through the zona pellucida that allows the sperm to reach the egg cell membrane. 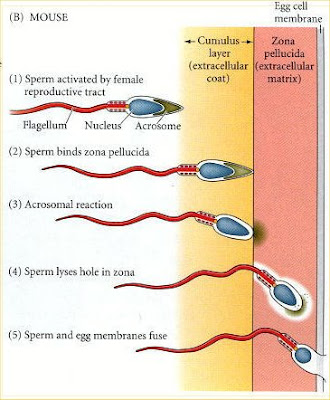 4) Once a given sperm cell has fused membranes with the egg, another chemical reaction takes place, modifying zona-pellucida proteins so that they can no longer bind to any additional sperm-cell surface proteins. This causes the swarm of sperm cells that has gathered around the zona pellucida to lose their grip on it and disperse before any more of them can deposit genetic material inside the egg.

So, the egg guides the sperm toward it, draws it in as it approaches, triggers the acrosomal reaction that allows the sperm to penetrate the dense zona pellucida, and, once that sperm has fused with the egg and deposited its genetic material inside it, it prevents any others from doing likewise.

"Material for the semen to work upon," indeed!

*Have a guess as to which one. No prize if you said "white Christian Anglo-American capitalist patriarchy," sorry!

**The egg actually contributes a bit more DNA to the eventual embryo than the sperm does, for two reasons: 1) sperm cells can have either an X or a (much smaller) Y chromosome, while the egg always has an X; and 2) sperm cells are super-streamlined, containing only a nucleus and a sac of cell-membrane-dissolving chemicals called an acrosomal vesicle within their cell bodies, while the egg has a normally-sized and -populated cytoplasm, which includes mitochondria, which have their own vestigial genomes. (Sperm have mitochondria, too, but they're associated with the flagellum and do not enter the egg during fertilization).
Posted by Lindsay at 6:58 PM

Very interesting stuff! And there's also the whole idea that nothing beyond that actual joining of gametes is relevant to the creation of a person. Flowerpot indeed! When I was pregnant, I bossed my husband around constantly, and if he complained I would point to my stomach and say "Excuse me -- creating LIFE here!" I had to go back to being reasonable after having the kid, but I was not going to let anyone minimize my role in that business.