Autism and Genetics: It's Complicated

Though most autism researchers believe autism is at least partly determined by genetics --- it co-occurs most of the time in identical twins, and a higher-than-baseline proportion of the time in fraternal twins and non-twin siblings --- they haven't really been able to find genetic variations that account for more than a small minority of cases of autism.

Here's an illustration of that paucity of known genetic explanations for autism: 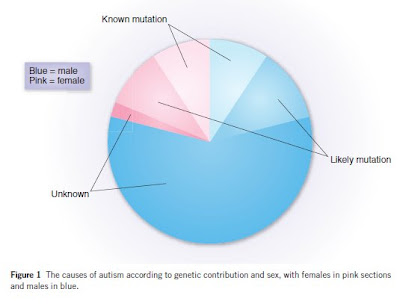 It's not that candidate genes aren't showing up; it's just that each mutation found that seems like it might underlie some aspect of autism is only present in a tiny, tiny fraction of all autistic people. Variations in a whole lot of different genes have been implicated in some cases of autism some of the time, but a genetic marker common to all (or even most) autistic people that's not also found in general population remains elusive.

This article in Science (full text here) from a few years ago adds more ambiguity to the whole mess: its authors (all thirty-two of them!) found a certain type of large-scale mutation called a copy-number variation (i.e., a given region of the genome is either missing, or repeated one or more times in a row) occurring about ten times as frequently in the autistic population whose DNA they sampled (n = 118) as in the non-autistic controls (n = 196), and a little more than three times as frequently as they occur in autistic people with another autistic person in their immediate family (n = 77).

They were able to see the copy-number variations using a type of comparative genomic hybridization called representational oligonucleotide microarray analysis (ROMA). (See this full-text article in Genome Research for a detailed description, and discussion, of this method of genomic hybridization).

Genomic hybridization, in general, is used to detect large-scale differences between a DNA sample of interest (usually, DNA taken from a tumor cell) and a reference sample. Both samples of DNA are tagged with small molecules that fluoresce in different colors, denatured (i.e., heated to a point where the strands untangle from one another), and added either to a sample of normal human chromosomes taken from cells that are just about to divide --- i.e., the paired chromosomes have split --- or to a slide covered in smaller DNA probes, or lengths of bases snipped from a reference sample of human genomic DNA at regular intervals. Given enough time, the denatured experimental and reference DNA samples will try to pair up ("hybridize") with the probe DNA that has been provided to them. When that happens, you can wash off all the single-stranded and unmoored double-stranded DNA (leaving only DNA that has hybridized to your probes, which are attached to a glass slide or microarray) and look at the radiation being emitted by the DNA left on the slide (using a fluorescence microscope or a spectrophotometer). Depending on what kind of copy-number variations (if any) are present in your sample, it will affect what color light you see more of. If you have a deletion of all or part of the genome regions represented by your probes*, the sample won't hybridize there, or it will hybridize very weakly, so you'll see a preponderance of whatever color you've chosen for your reference sample. Conversely, if a sequence of DNA is repeated in your sample, more of the experimental DNA than reference DNA will be able to hybridize to the (limited number of) probes, and the color you'll see will reflect that.

Now, ROMA differs from standard-issue microarray-based comparative genomic hybridization in one key way: instead of using a whole genome as a sample, it cuts up the genome with restriction endonucleases (enzymes for cutting up DNA that occur naturally in bacteria), amplifies the enzyme-digested sample (i.e., makes lots and lots of copies of it, with the help of a different bacteria-derived enzyme), and hybridizes these short fragments (called "representations") to a microarray probe equipped with short sequences designed to be complementary to the fragments. According to the researchers who created this method, using representative fragments instead of whole genomes allows for the detection of copy-number variations on a smaller scale than was previously possible.

Anyway, that's the method of genomic analysis these researchers used. (Several of them, including the lead researcher, Jonathan Sebat, were on the team that pioneered ROMA in that aforementioned article.) There's a lot more detail about their methods here, in the Supporting Online Material, if there's anything you're curious about that I didn't address.

The weird thing about this research, the thing I wanted to point out as complicating the notion of autism-as-inherited-genetic-variation, was the fact that all of the copy-number variations they found, the ones that were present so much more frequently in autistic people without a similarly-affected relative, were de novo --- not inherited, but spontaneously arising during embryonic development. (In fact, inherited copy-number variations --- those found in both parents and children --- were left out of the statistical analysis. The researchers wanted to highlight de novo mutations).

Our findings have implications for an understanding of the genetic basis for ASDs. An important feature of the de novo CNVs we report is that each is individually rare in the population of patients. None of the genomic variants we detected were observed more than twice in our sample, and most were seen but once. Although our sample size is small, these results suggest that lesions at many different loci can contribute to autism, a result consistent with the findings from cytogenetics, as well as consistent with the failure to find common heritable variants with a major effect on disease risk. Lack of recurrence may in fact reflect an underlying reality that autistic behavior can result from many different genetic defects. This would be consistent with the hypothesis that the common features of autism such as failure to develop social skills and repetitive and obsessive behavior may in fact be the consequence of a reaction to many different cognitive impairments, drawing their "commonality" from a normal but maladaptive programmed response of humans early in development to those diverse impairments.
...
We can incorporate a high rate of spontaneous mutation in a genetic model that accounts for both sporadic and familial forms of the disease, based on new mutations that cause autism by haploinsufficiency [Wikipedia link] but have incomplete penetrance, especially in females. Such individuals who escape the phenotypic consequences can then pass on the mutation ... .

(Yes, there's an awful lot of pathologizing language in this excerpt. Sorry about that. The talk of "genetic defects" and such sets my Eugenics Radar a-pinging, and that's never a good sign.)

I also have no idea what is meant by that last sentence of the first paragraph, which attempts to explain the diverse genotypes all leading to one common phenotype, which we call autism. That's the biggest thing that confuses me about the size and heterogeneity of the pool of mutations that have been found in all the various genetic studies of autism --- how can all these different mutations lead to the same thing? This concern is somewhat mitigated by my knowledge of how imprecisely "autism" is defined, and the fact that it's defined behaviorally rather than physiologically.

While these findings of high rates of spontaneous mutation associated with autism do add another layer of complexity to the what-causes-autism debate ("It's genetic!" "It's acquired sometime during gestation!" "It's both!!"), they also make sense out of a lot of things. Foremost, it accounts for the lack of any one heritable mutation common to all (or most, or even a large minority of) autistic people, and the vast array of mutations occurring in individual autistic people.

It also makes the (what I assume to be**) relatively uniform proportion of autistic people in human populations across space and time make a bit more sense --- if it was mostly inherited, you would expect populations that are reproductively isolated from one another to diverge in their relative levels of this trait, as they do in other traits. But the rate of spontaneous mutation is more or less constant.

*or, if you're using chromosomal cGH, anywhere at all, so long as the deletion is big enough to matter at that level of analysis.

Autism genetics has been quite busy since then, including one I recently covered, looking at parent-of-origin effects, which might interest some of your readers:

Looking back, my article notes 6 genome-wide screens in 2009 in the footnotes. I would be disinclined to look to de novo mutations as the main source of autism, particularly given the relatively high incidence of autism. (De novo mutations in any one set of genes would be expected to be fairly rare.)

The subject is a bit too deep for me, but I "have a go at it" in my latest post: