One of my uncles is a professor, and spends part of each year teaching in Moscow. This year, on his return trip, he ended up spending a bit more time than he had anticipated in Germany, which he spent hanging around in Frankfurt.

While he was there he came across this exhibition at an art museum called Schirn Kunsthalle Frankfurt: "World Transformers. The art of the outsiders."

The exhibit features works by people who see the world in unusual ways:

Thinking outside the norm can result in fantastic works. Linked to creative abilities, to mental states that deviate more or less from the "normal," the everyday, Outsider artists reveal the unexpected in their works. Often located on society's margins, they illuminate the frontiers and contradictions of human existence, communicating a profound unease about the relationships between reality and fantasy. They direct our gaze onto the more opaque paths of thinking and offer an occasion to ask fundamental questions.

The artists whose works make up this exhibit come from different countries, and different times: from the 19th century to the present.

Some of them are:

George Widener, an autistic man currently living in Asheville, North Carolina who has a prodigious memory and savant abilities in mathematics, particularly calendar calculations. He taught himself to draw, and has created sprawling, intensely detailed ink drawings of futuristic cities, like this one, "Megalopolis 22" --- 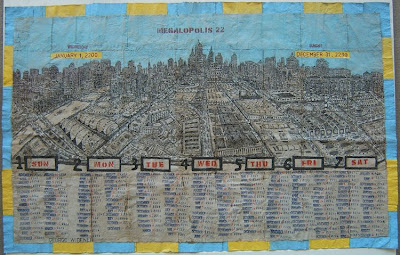 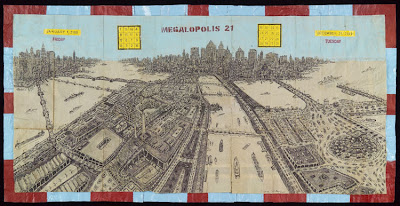 He also draws these unique numerical portraits of people, making magic squares out of significant dates in their lives. Here, for example, is "Queen Victoria". His calendrical creations aren't solely biographical, either --- he's done squares showing dates in all sorts of other patterns, too, like "Month of Sundays," a sequence of thirty Sundays derived from a thirty-year period in the 23rd century and arranged in order from 1 (June 1, 2200) to 30 (August 30, 2229). The day (of the month --- the day of the week is always Sunday) and the year advance by one in each succeeding square.

Madge Gill, an English visionary artist who lived from 1882 to 1961. She was a Spiritualist, and believed herself guided by a spirit called "Myrninerest" who was the source of her drawings.

The drawings often depict women --- glimpses of women's faces, peeking out from under hats: 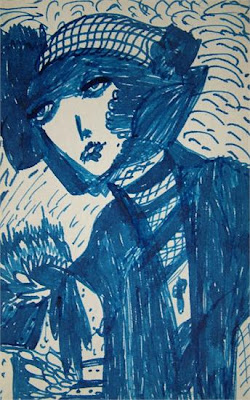 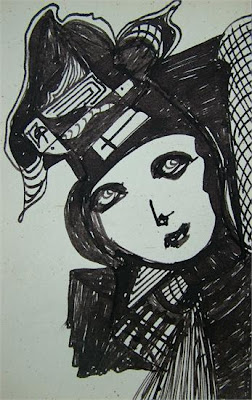 Other drawings do not have figures in them at all, just geometric shapes and surfaces patterned with checkerboards coming together at odd angles: 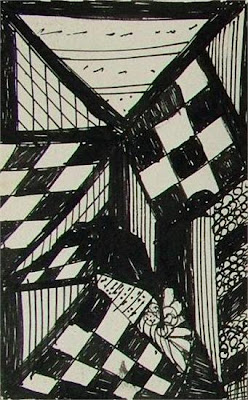 August Walla, who was born in 1936 and died in 2001, and spent his life from 1983 onward in a community of artists who were also psychiatric patients at the Lower Austrian Psychiatric Hospital in the town of Gugging, near Vienna.

He had a mythology, cosmology and symbolic vocabulary all his own, which he developed and expressed in his paintings.

Here is his room in the Haus der Künstler (Artists' House) where he lived; he painted on every available surface.

Henry Darger, who was institutionalized as a child in 1905, lived a hermit-like life in Chicago, Illinois until he died in 1973. He wrote fantastical stories about seven sisters who are princesses of a rebel (Christian) nation on another planet, fighting against a tyrannical alien species that uses human children as slaves. He was devoutly Catholic, and went to Mass every day, sometimes several times in a day. 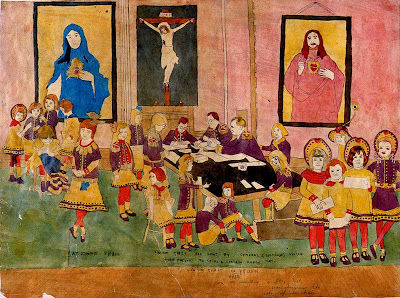 His visual artworks, beautiful and delicately painted watercolors of children, were illustrations for his stories. 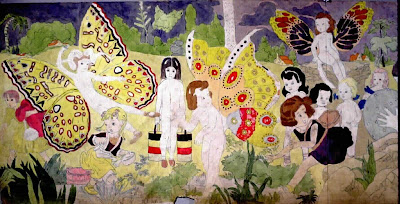 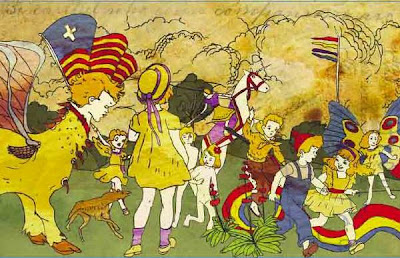 Amanda Forest Vivian has a post from a while ago about him.

There are more artists featured in this exhibit, but I've already spent a whole lot of time hunting down biographies and representative works from these four --- I had wanted to do all the artists named or otherwise represented on the Schirn webpage, with little capsule biographies and an image or two for each one, but that turned out to take a lot longer than I thought it would, and I wanted to have a post that didn't take me days to write for once.

But anyway, these artists are all awesome, some of them are even still living and making money off their art! So I definitely recommend going to this exhibit (which will be open into January) if you're in Frankfurt or can get there easily.

Wonderful! Thanks for posting this, as an artist first, and a member of a one-person psychiatric study! (myself) ;)