Lack of eye contact is one of the first things people will list as a behavioral "tell" for autism; eye contact and related behaviors, like joint attention and what types of things an infant prefers to look at, have all been studied in the past 10 years as potential markers for autism in pre-verbal infants.


This 2002 study (full text here) by Svetlana Lutchmaya, Simon Baron-Cohen, and Peter Raggatt looked for relationships between the amount of testosterone present in the amniotic fluid of 70 British women who had undergone amniocentesis between 1996 and 1997, and how much eye contact those women's children (41 boys and 29 girls) made when they were a year old.

The researchers measured this by filming the children interacting with a parent and a female experimenter over 20 minutes, and tracking the number of times during that period that the infant looked at the parent's face. (The infants were also presented with six different toys during the filmed period, so that they had a choice of what to attend to: their parents' faces or an interesting object). 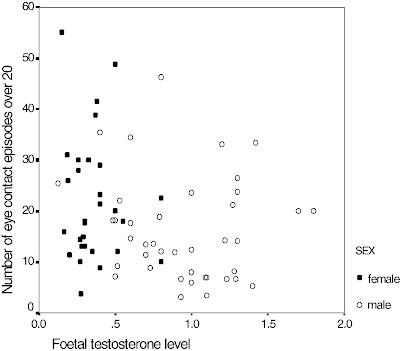 (Figure 3, in Lutchmaya, Baron-Cohen and Raggatt, 2002 --- scatter plot of fetal testosterone vs. number of instances of eye contact with parents during 20-minute filmed period, broken down by sex)

They found a relationship between fetal testosterone levels and number of instances of eye contact for the mixed-sex group and for boys only, but there was no relationship for girls. There was also an overall sex difference in amount of eye contact made (as well as in fetal testosterone --- all but two of the girls had testosterone levels clustered in a narrow band between 0 and 0.5 nanomoles per liter, with most falling between about 0.3 and 0.4 nmol/L; while the boys had a much broader range of testosterone levels, with most of them falling between 0.5 and 1.5 nmol/L, distributed pretty much evenly along that span, although there were slightly more of them with testosterone levels in the 1.25-nmol/L ballpark than at any other level): girls in general made eye contact with their parents more frequently than boys, to the tune of about 22 times over 20 minutes vs. the boys' 16 times. It should be pointed out, though, that there was a lot of variation within each sex, with plenty of girls making between 10 and 20 attempts at eye contact (where most of the boys seem to be clustered, though there are also a lot of them in the under-10 category, where there are few girls). There also seem to be equal numbers of boys and girls making the most eye contact --- the biggest differences I see are in the medium-high and very low frequency categories, with girls overrepresented in the former and boys in the latter.

Finally, there was a factor that seemed to be almost as strongly correlated to frequency of eye contact as the two major variables being investigated in this study, sex and fetal testosterone: number of siblings. The more siblings a child had, the less often that child looked at his or her parent during the 20-minute interval when the researchers were watching them. This makes sense, when you consider that siblings would all demand an (approximately) equal share of their parents' attention --- the more of them there are, the less one-on-one time each can expect.