(An addendum to my earlier post on this topic)

Looking back at this article (full text here), I notice something I didn't write about in my earlier (as yet unpublished) post about it --- one of the things its authors were testing for, looking to see if it had any relation to how much testosterone they found in their study participants' mothers' amniotic fluid, was IQ (measured using the Wechsler Abbreviated Scale of Intelligence, or WASI).

More importantly, the researchers also tracked their subjects' scores on one particular subscale of the Wechsler test --- Block Design --- which has been shown over and over again to be something autistic people are very, very good at.

Not only are we better, overall, than non-autistic people are at this task, we also score much higher on it than we do on any other subscale of a Wechsler IQ test.

Our scores, when you plot them across all the different subscales, tend to show this characteristic pattern, of a valley on the (verbal) Comprehension subscale and a very high peak on the Block Design subscale:

(Image adapted from Figure 1 in Dawson et al., 2007; each square along the line represents a different subscale of the Wechsler Intelligence Scale for Children - Third Edition)

Here is another image, from a much older study, showing the difference between the distribution across the different subscales of a Wechsler test of autistic and non-autistic test-takers' scores. 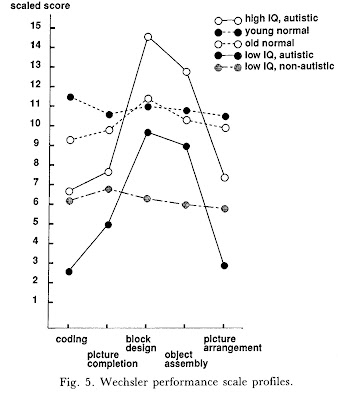 As raw scores for each subscale of the WASI were not given in Auyeung et al., 2009, I can't tell anything about whether their subjects' Block Design scores were particularly high relative to the other subscales.

However, I can tell you that there were no sex differences on Block Design --- boys' average score was 19.14 to girls' 16.26, but the standard deviation for both sexes is probably somewhere between 9.5 and 10*, making the difference between the sexes a little less than one-third of a standard deviation, and thus not statistically significant.

Also, within each sex, amniotic testosterone had no relationship to any of the IQ measures the researchers reported --- not full-scale IQ, not verbal IQ, not performance IQ and not the Block Design subscale of performance IQ.

So, this cognitive ability characteristic of autism doesn't seem to vary with sex or with androgenicity.

*Standard deviations are only given for boys and girls separately; for boys, it is 9.41; for girls, 10.08. There are 43 boys and 31 girls in this study population.

Where are you Lindsay? I am here wishing you a happy New Year in 2011, much personal satisfaction and the path forward made easy. I am glad you know Clarissa and think you both did important posting on that bill the two of you wrote about. Did my heart good to see intelligent women writing about matters of importance to women.Looking forward to more of that in 2011.

Thanks for the compliment, and for the good wishes.

Happy New Year to you, too!

Shah and Frith's table is a visual representation of an autistic way of thinking. It is outstanding in a way, it shows autism is outside the parameters of "intelligence quotient". Too bad Frith saw it as a weakness. Dawson, et al, are on a new track. Imagine one day testing being used to find autistic minds so they can be taught in a way that makes use of their strengths!

Ben took the Weschler (?) at age 4, and had an IQ measure of 79, although he scored the level of a 10 year old in one test, probably block assembly. I don't have the scores in front of me...I know it was a "visual" aspect that he scored high in, and that his IQ was near the border of retardation. His IQ was 99 at age 7, 116 at age 8. I have no idea what it is now, but we homeschool him because he'd be in a special ed behavioral classroom if we didn't.

@r.b. - Yeah, I remember Frith seemed to think our superior performance on some tasks (Embedded Figures Test, for one) meant we had "weak central coherence" --- couldn't see the forest for the trees.

I'm glad you were able to identify your son's strengths, though! I also agree with you that he might not get the kind of education he needs if you were to send him to school --- schools seem to have gotten worse at accommodating autistic students since I was in school.

Oh, also: r.b., I don't know if you've gotten to read all of the Dawson article, yet, but she and her coauthors seem to think Raven's Progressive Matrices do a better job of measuring intelligence in autistic people.