An article published last year in the American Journal of Sociology argues that knowing someone in your neighborhood who has an autistic child makes it likelier that your child, too, will be diagnosed with autism.

The authors' explanation for this is not that autism is "catching," or that people with autistic children are likelier to live in certain places (they investigated both of those possibilities, along with the possibility that some environmental contaminant makes some neighborhoods have more autistic children than others); it's that parents talk to each other about their children, and if one family has an autistic child, and has gotten that child diagnosed and enrolled in services, those parents will tell other parents about that process, and thereby make it easier for other parents to do the same thing. (They may also, by describing their autistic children's behavior, make it more likely that other parents will consider the possibility that their child may be autistic).

What these researchers --- sociologists Peter Shawn Bearman, Marissa D. King (who has conducted a lot of research into autism demographics) and Ka-Yuet Liu --- did to derive this explanation was look at data on all children born in California since 1997, with younger siblings also born in California. (They needed to restrict their sample to children with younger siblings to get information on where the firstborn children spent their early years --- if the family's residence is the same for every child born to that family, the researchers could assume that the firstborn lived in the same place during the years between hir own birth and the birth of hir youngest sibling. That's the information they wanted --- where families lived during their children's early years). This gave them a pool of 533,244 children whose families lived at the same address when they were born as when their younger siblings were born. Then, they used data from the California Department of Developmental Services (I've written about this data set before, in a different context --- it's been used in a lot of studies investigating autism prevalence) to determine which of those children got an autism diagnosis, or a diagnosis of intellectual disability*, between the ages of 2 and 6.

They created a statistical model to see if they could accurately predict which children would end up with a diagnosis of Autistic Disorder**. Their model, which is supposed to predict the odds of any given child being diagnosed with autism in a given year, t, uses the physical proximity of a child diagnosed with autism in the previous year, t - 1, as its predictive variable. They divide this continuous measure --- how far away does [other child with autism] live? --- into six discrete groups: 1 - 250 m; 251 - 500 m; 501 m - 1 km; 1001 m - 2 km; 2001 m - 5 km; and all distances over 5 km. (They used a continuous measure of distance, too). They controlled for a slew of other variables --- sex, maternal age, socioeconomic status (measured by mother's educational attainment and whether she received state assistance with pregnancy- and birth-related medical expenses), proximity to autism-related healthcare services, neighborhood population density, and neighborhood median income --- and predicted that the odds of a child being diagnosed with autism would increase the closer they lived to a child already bearing that diagnosis, and that the odds of a child being diagnosed with intellectual disability independent of any other condition would decrease with increasing proximity to a child diagnosed with autism. They also predicted a pattern in what kind of autistic children would show the greatest change in likelihood of diagnosis: they thought that the "high[est]-functioning" children, who scored the lowest on their measure of autism severity***, would show the greatest effect, along with the youngest children (age 3 or younger). Their reasoning is that, since these are the most ambiguous cases, whether or not their parents knew someone else with an autistic child, and thus got it into their heads to consider whether their child might also be autistic, would make the most difference, since there are less likely to be really obvious, textbook signs of autism. (Or, if signs are present, say, in the very young children, knowing another family with an autistic child might predispose the parents to have their child evaluated sooner, rather than waiting to see if, say, the child is just a late talker).

Sure enough, they found the patterns they'd predicted.

This graph shows the clustering of actual data points around their theoretical curve; you can see it's a pretty close fit. 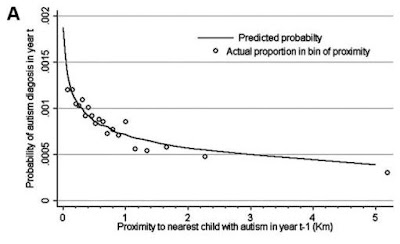 (Figure 2A, in Bearman, King and Liu, 2010. The x-axis shows distance, in kilometers, from the nearest home with a child with an autism diagnosis, and the y-axis shows the probability that any given child living at that distance will be diagnosed with autism within the next year).

Here's a different representation of the same data: 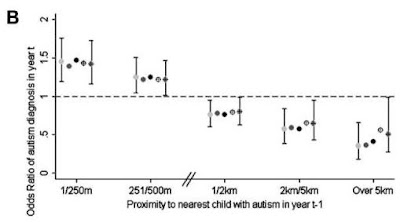 From the Results section:

[W]e also report the effects of proximity as a categorical variable. All odds ratios (ORs) are relative to the reference category of 501 meters - 1 kilometer. ... In figure 2B, we can observe that residing in close proximity to a child diagnosed with autism increases one's chance of being diagnosed with autism in the subsequent year. Compared with children who are 501 meters - 1 kilometer away from their nearest neighbor with autism, those in close proximity (1 - 250 meters) to a child with autism have a 42% higher chance of being diagnosed with autism in the subsequent year. Proximity of 201 - 500 meters increases the chance by 22%. In contrast, being farther away from a child with autism reduces the chance of a diagnosis. Although the last three categories were all significantly associated with the decrease (-21%, -36%, and -49%), there were no statistically significant differences among these three categories. This is consistent with the results in figure 2A, which show that the effect of proximity is strongest within one kilometer, followed by a flat tail. 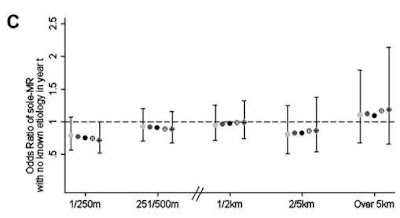 ... and 2) being diagnosed with autism at varying levels of severity: 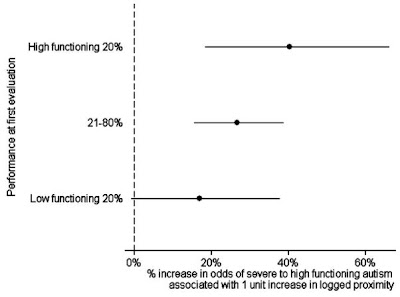 (Figure 3, in Bearman, King and Liu, 2010. The x-axis shows the percent increase in odds of receiving an autism diagnosis associated with proximity to a recently-diagnosed autistic child; the y-axis shows the child's level of disability as assessed by the state's Client Development Evaluation Reports. The highest-scoring, or least impaired, 20% are compared to the bottom, or most seriously impaired, 20%, and to the middle 60%. You can see that the "highest-functioning" group shows a stronger effect of proximity to another autistic child on their chances of being diagnosed than either the middle group or the "lowest-functioning" group, whose chances of being diagnosed with autism were least affected by proximity to another recently-diagnosed autistic child.)

The researchers were pretty well satisfied that the effect they found for proximity wasn't an artifact of shared environmental contamination because they saw the same pattern in a large, diverse sample of neighborhoods. They looked at rural, urban and suburban communities, which would all have their own distinct toxicological profile. (For instance, pesticide exposure would be a likely risk factor in rural areas, and a possible one in suburban areas, but pretty unlikely in urban areas. Similarly, air pollution is probably only a serious factor in dense urban areas.) There were other patterns that would not be explained by shared environmental risk factors or viral transmission, but that do fit with the social-diffusion hypothesis: first, a strong tendency of people coming in for diagnostic evaluations to have been referred there in the way as their nearest neighbor with an autistic child, and second, for people living on or near a border between school districts, the proximity effect was only seen for children living nearby who also attended school in the same district.

So, I find all this pretty supportive of their idea that social networks play a role in determining who is and who is not diagnosed with autism; what is less clear to me is how much of a role they play compared with other factors, like socioeconomic status, parents' ages, male gender, or having an autistic relative.

What Drs. Bearman, King and Liu did to try and answer that question is calculate the population attributable fractions (PAFs) --- the difference any given risk factor makes in the number of people who develop a certain condition --- for proximity to another autistic child, and also for each of three sociodemographic indicators: mother's age at the time of her child's birth, mother's educational attainment, and whether the state of California paid for her prenatal and obstetric care. By this metric, they found a greater role for proximity than for any other factor: living within 500 meters of a family with a recently-diagnosed autistic child raised children's likelihood of being diagnosed with autism in a given year by 16%.

While this may be a larger effect than any of the other, more-established risk factors, it's not larger by all that much, and in absolute size it's also not very big. I would expect that, though --- most children don't have autism, so the most a social diffusion of autism awareness could do is make the parents of those children who do have autism take them in to be evaluated sooner. (Or, maybe for a few families, at all --- but with schools getting more and more proactive about identifying special-needs children, it's not very likely anymore that a child with autism could get all the way through K-12 without being flagged somewhere along the line).

**They only counted children in this category, and not any other pervasive developmental disorder, because only Autistic Disorder is a category eligible for state services. The researchers felt that parents' main motivation in pursuing a diagnosis would be to gain access to services, so they didn't bother tracking the diagnoses that wouldn't be useful toward that end.

***Their severity measure involved nine items from the California DDS's Client Development Evaluation Report (CDER) on each child. (Here is a PDF of the complete CDER form, if you want to go and look at what exactly these items are measuring). The overall measure was an equally-weighted average of scores on three "scales" --- communication (made up of 3 CDER items: item # 58, word usage; item # 61, receptive language; and item # 62, expressive language), social interaction (made up of 5 CDER items: item # 27, peer interaction; item # 28, interaction with nonpeers; item # 29, friendship formation; item # 30, friendship maintenance; and item # 31, participation in social activities), and a single CDER item, # 42, measuring repetitive and stereotyped behaviors. (I find it a bit odd that they didn't include self-injurious behavior as part of their severity measure --- there are two items on the CDER addressing that, and the presence or absence of self-harm seems to me a more important measure of how "severe" someone's problems are than, say, being able to interact "normally" with one's peers.)
Posted by Lindsay at 5:11 PM