Death, be not proud, though some have callèd thee
Mighty and dreadful, for thou art not so;
For those, whom thou think'st thou dost overthrow,
Die not, poor Death, nor yet canst thou kill me. 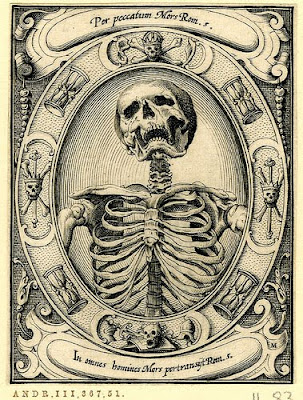 BPS Research Digest described a recent study in which a group of psychologists looked at the influence of thoughts of one's own death on people's attitudes toward two different ideas about human origins: evolutionary theory and the variant of creationism known as Intelligent Design. 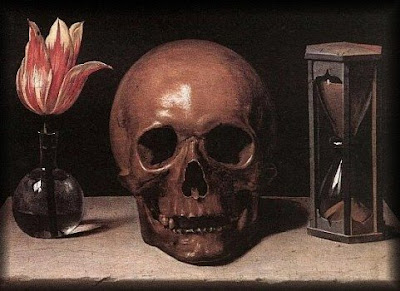 The researchers --- Dr. Jessica L. Tracy, who is an assistant professor of social and personality psychology at the University of British Columbia's Vancouver campus, where she is also director of the Emotion and Self Lab, Dr. Joshua J. Hart, who is an assistant professor of psychology at a small liberal arts college in New York called Union College, and UBC graduate student Jason Martens --- went to rather more trouble than is usual in these social-psychology studies in their search for a diverse study population.

Too often, these studies make claims about "people" based on surveys of psychology undergraduates at one university. In this study, one of the five mini-experiments involved people from all over the US who filled out surveys online. They ranged in age from 18 to 75, with a median age of 37, so most of them were substantially older than the college students questioned in the other four experiments. They also came from (one assumes) a broader distribution of socioeconomic classes; socioeconomic data are not given for any of the student groups, but the general-population group includes people from a wide range of income levels: 12% of respondents reported making less than $20,000 a year, 25% made between $20,000 and $40,000, 20% made between $40,000 and $60,000, 11% made between $60,000 and $80,000, 8% made between $80,000 and $100,000, and 9% made more than $100,000 a year. (Fifteen percent of respondents chose not to say how much money they made). The general-population sample also included people with more widely varying educational backgrounds: 26% had a high school diploma or less, 33% had been to college but hadn't gotten a degree, 32% had a college degree, and 9% had a postgraduate degree. 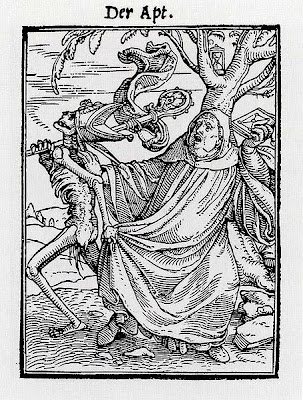 Each group of participants was asked to specify their religion and rate how religious they thought they were, and then to read a passage written by either Richard Dawkins or Michael Behe discussing either evolution or Intelligent Design, and rate their attitudes toward the two belief systems and their representative authors.

Right before they did this, they were asked to imagine one of two unpleasant things (death vs. painful dental work) and write briefly about their feelings. The reason for including this morbid exercise was to see if bringing mortality to the forefront of people's minds had any effect on their preference for a naturalistic or deistic worldview. 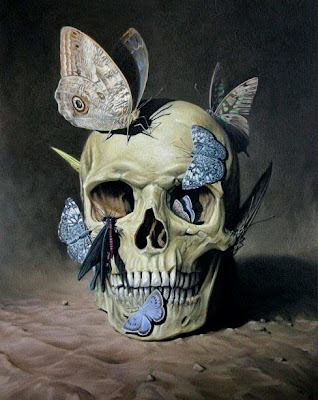 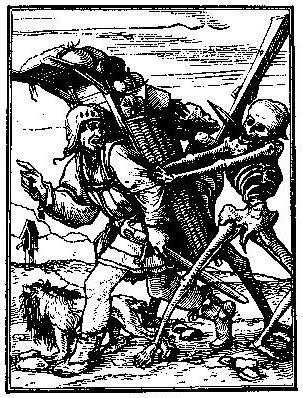 (Some more explanation of that last sentence: yes, being more religious meant you were more likely to be receptive to Intelligent Design whether you were asked to contemplate death or not; likewise with being Christian rather than belonging to any other religious tradition, or claiming no religion. But within each category, the researchers saw the same effect of the memento mori nudging people toward Intelligent Design and away from evolutionary theory. Oddly, being reminded of death did not prompt people to rate themselves as more religious, even though it had a noticeable effect on their ideas about human origins.)

While how much education a person had didn't make any difference in how they responded to the memento mori, the type of education did have some dampening effects. Compared to the general-population and general-student-population groups, the psychology students expressed less hostility to evolutionary theory in response to the memento mori, although they showed the same increase in receptivity to Intelligent Design.

Resistance to these effects was strongest in the natural-science students, who actually responded in the opposite way to the memento mori; when confronted with the thought of death, they reported feeling a stronger affirmation of evolution and repudiation of creationism.

The authors hypothesized that people would react to the thought of death by looking for something that confers some lasting meaning on human life; for most people, a divine Creator fills that role readily enough. One of their experiments --- one of the two using psychology undergraduates as guinea pigs --- addressed this hypothesis directly: they compared the responses of students who had read a passage by Carl Sagan aimed at dispelling fears that the scientific understanding of the universe is nihilistic with those of students who did not read this humanistic passage, looking to see if exposure to a Middle Way between deism and nihilism didn't moderate the shift toward Intelligent Design prompted by the students' meditating on their own deaths.

Here is the Sagan passage:

It is very reasonable for humans to want to understand something of our context in a broader universe, awesome and vast. It is also reasonable for us to want to understand something about ourselves. And understanding the nature of the world and the nature of ourselves is, to a very major degree, I believe, what the human enterprise is about. Truth should be pursued, and science helps us pursue it; science gives us meaning. All we have to do is maintain some tolerance for ambiguity, because right now science does not have all the answers. This tolerance goes with the courageous intent to greet the universe as it really is, not to foist our emotional predispositions on it but to courageously accept what our explorations and knowledge tell us. The more likely we are to assume that the solution comes from something outside science, the less likely we are to solve our problems ourselves. If we are merely matter that is intricately assembled, is this really demeaning? If there's nothing in here but atoms, does that make us less, or does that make matter more? We make our purpose. And we have to work out what that is, for ourselves.

Sure enough, students who read this passage did seem to be less threatened by evolution, even with thoughts of their own individual mortality foremost in their minds: they responded to the thought of death by reporting less of a warm feeling for Intelligent Design, and more for evolutionary theory.

Here is the authors' summation of their findings:

The present findings demonstrate that reminders of one's mortality --- inducing a state of mortality salience --- promote relative support for [Intelligent Design Theory], and skepticism toward [Evolutionary Theory]. Individuals respond to existential threat by becoming more accepting of a theory that offers a greater sense of meaning by depicting human life as having ultimate purpose (while appearing consistent with the scientific worldview), and/or less supportive of the theory that is the true mainstay of the scientific worldview but seems to offer little in the way of existential comfort. These findings also suggest that a desire to find greater meaning in human life accounts for this effect (at least the effect of mortality salience on belief in IDT), because it is reversed by making ET more meaningful, and among natural-science students for whom ET is already meaningful. The findings are notable because they (a) help explain why some people are motivated to believe in IDT and doubt ET in terms of fundamental psychological drives; (b) account for the underlying causal process; and (c) emerged regardless of preexisting religious ideologies, religious affiliation, or (with one highly limited exception, discussed below) views of evolution. The last point suggests that although religion influences baseline beliefs in IDT and ET, it cannot account for the impact of MS on these views. Given previous research suggesting that many MS effects are heightened, or occur only, among individuals with certain preexisting belief systems or cultural associations, the fact that we found no moderators of MS effects --- other than the extent to which naturalism is seen as meaningful --- suggests that embracing IDT or rejecting ET may be a unique, broadly appealing mechanism that addresses the existential concerns of religious and, for the most part, more scientifically oriented individuals alike. In contrast, explicitly religious ideologies tend to be fairly parochial, limiting their appeals and making them viable defenses only for those who already believe in a supernatural god.

Yet, an exception emerged in Study 5, where individuals whose life goals require strong acceptance of ET showed the opposite responses. Like those explicitly taught, in Study 4, to view naturalism as a source of meaning, natural-science students responded to MS with stronger antagonism toward IDT. This provides converging support for the causal process found in Study 4, and suggests that rejecting IDT can be a source of existential comfort for a limited population of individuals. These individuals are not simply those steeped in the scientific cultural worldview --- presumably psychology undergraduates fall into that category --- but rather those who more specifically view evolution as a critical part of their understanding of the world and a source of meaning and purpose.

They also point out in the final section of the article that these results might shed some light on why creation-vs.-evolution has remained such an intractable social issue: rather than being solely determined by religious doctrine, political ideology or (lack of) scientific literacy, people's embrace of creationism is also a response to the fear of death. Merely cataloguing the evidence for evolution doesn't address these underlying emotional issues; it tears away the defense mechanism while providing nothing to replace it. To my mind, that goes a long way toward explaining not only the deadlock between sides but also the rancor in this debate.

(Of course, many evolution-defending speakers do emphasize the existential perks of their worldview: a sense of wonder at being part of such a beautiful, intricate, ever-changing universe; the feeling of joy as you discover deeper and deeper layers of life's complexity; a stronger sense of kinship with other forms of animal life, etc. Why, even Richard Dawkins, the theorist featured in this study as representative of the godless, naturalistic worldview, has written a lot --- most notably in his book Unweaving the Rainbow --- about the beauties and benefits of that worldview. So the emotional angle isn't all there is to this, though I think it is important and not usually given the prominence it deserves).

*The authors do not explain what fields are included in this umbrella category "natural sciences." As it is commonly used, it encompasses fields having nothing whatsoever to do with evolution, like physics, or chemistry, or astronomy or geology. So I would quibble a bit with their assertion that strong acceptance of evolutionary theory is necessary for one to progress in the "natural sciences" --- it is quite possible to complete a degree in a non-biological science field without ever encountering it.