Andrea linked to this post on Indexed, a blog whose entries consist of graphs and Venn diagrams making various weird/funny/trenchant comparisons between different categories of things.

I'm not going to reproduce any of the images here --- that would be taking pageviews away from Jessica Hagy, who draws them and who appears to make money from her website, so for her a pageview is more akin to someone walking into a shop she owns, rather than just a way to gauge how many people read her, as they are to me --- but I will link to some of the ones I liked the best:
Please sir, I want some more.
Covens & convents.
We'll just get a new one.
Nothing is for everybody.
A little something for the pagans.

The whole concept of the site reminds me a lot of this old strip from xkcd ...
Posted by Lindsay at 9:15 PM No comments:

Kev at Left Brain/Right Brain linked to this press release describing a new study published last week in PLoS ONE, that builds on several previous studies comparing gene expression in autistic people and their non-autistic siblings.

This study focuses on one gene, RORA, whose product is a steroid hormone receptor that also acts as a transcription factor. Previous studies had identified this gene as one that is expressed to a lesser degree in autistic people than in their non-autistic siblings; two studies compared the amount of mRNA (the product of DNA transcription, which serves as a template for protein synthesis) corresponding to certain genes that was present in cells taken from autistic people and their siblings, while a third study compared levels of DNA methylation (i.e., inactivation; methylated DNA is harder to transcribe) between those two groups. Only the third study mentions RORA, but the other two identify clusters of genes whose products do similar things, and are involved in similar processes, to RORA.

This study looks at the regulation of RORA by steroid hormones; its authors --- Drs. Valerie Hu and Ray-Chang Wu, along with grad students Terawit Sarachana and Minyi Xu --- found that both estrogen and testosterone affect its functioning (as assessed by bathing cultures of cells with solutions of varying strengths of either hormone, and then using qRT-PCR to determine how much RORA mRNA was produced under each condition), and that their effects are directly opposed to one another: testosterone suppresses the transcription of RORA, while estrogen enhances it.

They also found sequences within another gene --- that for aromatase, an enzyme that converts testosterone into estrogen --- that are the same as those making up RORA binding sites in other genes, which indicates that RORA might be involved in regulating the production of aromatase.

Given this, Sarachana and colleagues see the potential for a feedback loop: in the presence of testosterone, RORA is less active, which could mean that less aromatase is produced, which would mean more testosterone accumulates, leading to even more suppression of RORA. 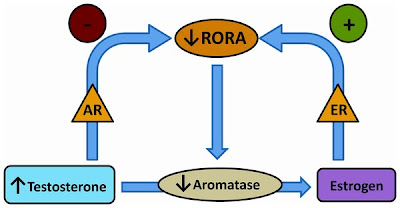 Figure 5, in Sarachana et al., 2011 --- diagram showing the up- or down-regulation of RORA by the steroid hormones estrogen and testosterone, and the regulation of aromatase, and therefore estrogen synthesis, by RORA

There was an upper limit to the dose-response effect of either hormone, though: for both, it was the 1-nanomole/L solution that had the strongest effect on RORA transcription, which seems to suggest that at very high concentrations of testosterone, RORA transcription might creep back upward. 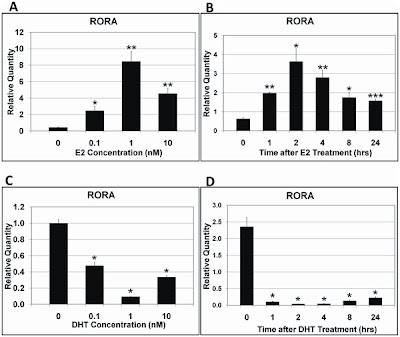 Figure 1, in Sarachana et al., 2011; graphs showing the relative amounts of RORA expressed when cells are treated with three different strengths of a solution of either dihydrotestosterone (C) or 17-beta-estradiol (A), and also changes in expression of RORA over time following treatment with 1-nM solution of DHT (D) or estradiol (B)

Given that RORA has already been found to be less active in autistic people than it is in their non-autistic siblings, the suppression of RORA by testosterone provides a possible biological mechanism underpinning the greater prevalence of autism among males than females, and also associations found between higher levels of testosterone exposure in utero and later development of autistic traits.

There is some evidence for this proposed relationship; Sarachana and colleagues also assayed(post-mortem) brain tissue from autistic (n = 12) and non-autistic donors (n = 22), measuring both RORA and aromatase levels by immunofluorescence. They found two things that would tend to support their low RORA --> low aromatase --> more testosterone hypothesis: RORA is indeed present in smaller amounts in the brain tissue from autistic donors, and aromatase levels are strongly correlated with RORA levels in all the brains that were analyzed. 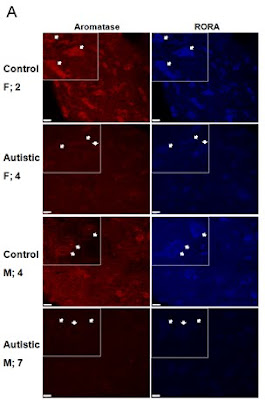 Figure 4A, in Sarachana et al., 2011; comparison between representative samples of brain tissue labeled to show either RORA (red) or aromatase (blue) expression. The top two samples come from female donors; the bottom two come from male donors. The second and fourth sample (one male, one female) come from autistic donors; the first and third come from age-matched non-autistic donors. You can see that the samples from the autistic donors are dimmer than the control samples; less color indicates less of the compound being assayed for, since the fluorescent molecule is attached to an antibody that will only bind to the protein of interest (RORA or aromatase, in this case). 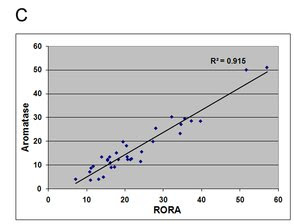 In this article, Valerie Hu and her co-author Mara Steinberg describe a new method for sorting autistic study participants into subgroups based on how they scored on individual questions on the Autism Diagnostic Interview (ADI-R). The rationale for this, which Jon Brock has elegantly demonstrated on his blog, is that two people can both meet diagnostic criteria for autism without having even a single trait in common. So Hu and Steinberg's method is supposed to sort autistic people into groups with the people whose clinical profiles most match their own.

They came up with four categories: people with severe language impairment, people with savant skills, people with relatively mild symptoms distributed across all the ADI-R domains (i.e., language, nonverbal communication, social interaction, play skills, interests and behaviors, physical sensitivities and mannerisms, aggression, and savant skills), and people with intermediate (i.e., neither mild nor severe) symptoms who were also less likely than the other groups to have savant skills. Three of these groups were chosen for inclusion in later gene-expression studies: the language-impaired group, the savant group, and the mild-autism group. Other people weeded out of the gene-expression study population were people whose autism was part of a genetic syndrome, like Rett syndrome or Fragile X, people with other psychiatric diagnoses, people who were born prematurely, people with significant cognitive impairment, and female people (!).

(I suspect the last group --- women and girls with autism --- were left out just because there were so few of them. Of the 1,954 people who were sorted into groups, only 428 were female.)

Once all the potential confounders were weeded out, the researchers had cell lines derived from 86 autistic individuals --- 31 in the language-impairment group, 26 in the mild-autism group, 16 in the savant group, and 13 who apparently met inclusion criteria for both the savant and language-impairment groups --- which made up the autistic sample in this study, contrasted with 30 non-autistic controls. The other study Sarachana and colleagues cite as providing evidence of RORA underexpression in autistic people is this one, which predates Hu and Steinberg's method for dividing autistic people into subgroups; its population, since it is composed of identical twins, is a lot smaller: just six sets of twins (five with at least one twin diagnosed with autism) and non-autistic siblings of two of the sets of twins --- fourteen people overall.

So, while the model Sarachana and colleagues propose --- a predisposition for autistic people to suppress expression of RORA, which both creates and is reinforced by a high-androgen environment --- is really interesting, and could shed light on 1) how male and female autistics differ and 2) what the male:female ratio within autism might be in a perfect world where diagnostic criteria weren't geared more toward men and boys, I'd like to see the underexpression-of-RORA finding replicated in a bigger study.