Things You Don't See Every Day: Discussion of Sexism in Superhero Comics

I was really pleasantly surprised when I was given Classic X-Men #34 as a gift recently; besides the conclusion to an exciting story arc (which I had anticipated), the issue also included this little gem of a backup story written by Ann Nocenti and drawn by John Bolton. 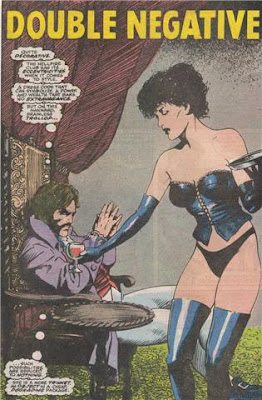 Ann Nocenti frequently wrote the backup stories for the Classic X-Men series --- that series consists of reprints from an earlier run of Uncanny X-Men paired with new stories that are usually vignettes focusing on aspects of one particular character's personality. This story, which ran in June of 1989, features villains Emma Frost (the White Queen of the Hellfire Club) and Jason Wyngarde (Mastermind, also Black King of the Hellfire Club), and, caught between them, a hapless cocktail waitress who works at the Hellfire Club.

It begins with the waitress trying to serve drinks to Jason Wyngarde, who leers at her in a particularly unsettling manner: 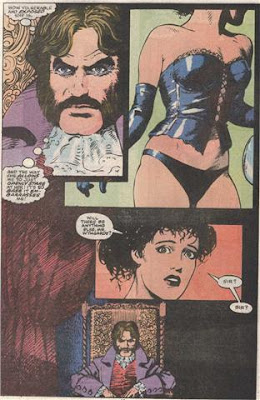 (If you can't read the text, the topmost inset panel shows a scary-looking guy in Victorian garb staring at the body of a young woman wearing black lingerie and thigh-high boots, thinking: "How vulnerable and exposed she is. And the way she allows me to just openly stare at her! It's so base it embarrasses me!" The girl speaks to him, saying, "Will there be anything else, Mr. Wyngarde?" When he doesn't answer, she keeps trying: "Sir? Sir?" but still can't wrest any acknowledgement from him.)
Shaken, the waitress retreats to the women's dressing room, where she bumps into Emma Frost, who is changing into her uniform. The waitress starts to talk to Emma about Wyngarde, hoping to find an empathetic listener in another woman:

(Dialogue: "Isn't it all so sexist? I mean, shouldn't we protest, on principle? It's our skills, as servants, that should count, not how we look. I mean, am I right?")

(Waitress: "Shouldn't we stick together, as women, and refuse to dress like this?" Emma Frost: "What are you babbling about?")

This other woman being Emma Frost, however, no such consolation is forthcoming.
("Who do you take me for? Just another servant girl?") ("I am the White Queen! Yes, you wear that outfit, and men look at you, and it cheapens you.")
("But when I wear it, it cheapens them. Let me explain a few things about sexism, girl. It's all in what you use it for!") --- I like the appalled look on the waitress's face when she hears this. It's clear that what Emma is saying is blowing her mind, but the nuances of her reaction are left unclear. I prefer to imagine her thinking something like, "You are soooo deep in denial it's making me dizzy."
("... But it's really about personal domination. My clothes are my battle armor! I dress to go to war! My looks and body are weapons on par with a man's fists.")

("There is no such thing as sexism, unless you give them that power!")
To illustrate her highly personalized philosophy of female empowerment, Emma Frost sallies forth to confront the man whose churlish behavior inspired the whole discussion. She sits down opposite him, placing herself in the position of an equal, a competitor, rather than a servant, and plays a brutal, high-stakes game of psychic chess with him. 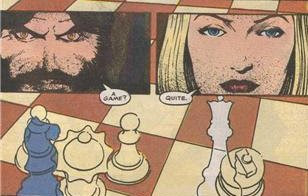 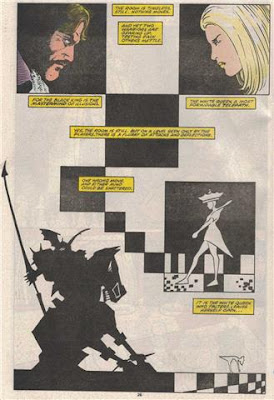 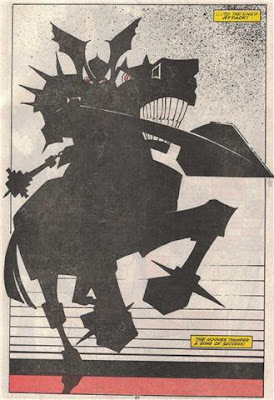 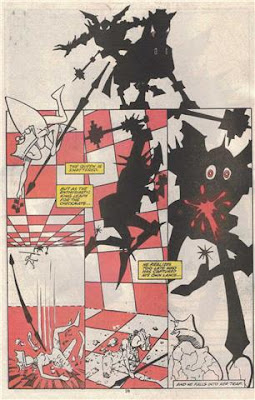 Neither character emerges from the battle unscathed: Emma manages to impale Wyngarde on his own spear, but in doing so she sustains enough damage to shatter her psionic self. Yet she doesn't, won't, and can't leave the table --- the combat means too much to her, even if it may ultimately kill her.

The point I see Nocenti making here is this: trying to fight sexism by making it work for you --- in Emma's case, embodying perfectly the patriarchal conception of the femme fatale --- is a sucker's game. No woman can do it well enough, and even if she could, the game is still ultimately rigged against her.
Posted by Lindsay at 9:56 PM

Reminds me a bit of some Ayn Rand female characters, like Dominique Francon (The fountainhead and Dagny Taggart (Atlas Shrugged).

Ooooh wow!
And it isn't cheesy simplistic straw-feminism either.
I absolutely love how you described the comic and I'm so going to try it in that style as well when discussing comics next time. With my last comic post I was so torn whether I should do a "transcript" or an image description and wondered how that could work for people who can't see the comic, especially when it's a funny one where the humour is in the drawings and not only in the words.
But you showed that it's possible to convey what's being said between the lines.

I used to buy this title, but don't remember this particular issue. Good story. Now if only this sensibility had carried over to the main stories.

I have a slightly OT question. Gate to Women's Country drove me up a tree, but tons of people say it's really feminist. But to me it seemed to have been-
Negatively stereotyping men
The women wanted to create more servitors, but it seemed like they didn't get any sex, but had all of the babies. How was that fair? If I was in that book, I wouldn't have anything to do with those stupid warriors. I would have run off with the servitor dudes as they seem cooler.
Also they cured homosexuality. Which irritated me.
What is your take on this book? Perhaps I hated it because of bias on my part.

Thanks for this great post! I'm new reader of your blog ;)

@Chromesthesia - your question is actually a lot less OT than it seems! I've got a post on all of Sheri S. Tepper's books that I've read so far (because I've noticed they all deal with more or less the same cluster of themes, so to me it makes sense to discuss them all at once), of which Gate to Women's Country is one.

I don't remember any mention of "curing" homosexuality --- maybe I should reread it, because it's been a couple years. If that is in there, yes, that is annoying.

I liked the book overall, though, and definitely thought it feminist/egalitarian in outlook.

I did *NOT*, at all, get the impression that Women's Country was meant to be a matriarchy, with women ruling over a docile servant caste of men --- rather, it seemed to me that the relatively few nonaggressive men, the "servitors" who chose to stay in Women's Country, lived more or less on equal terms with the women, and were respected and listened to in city councils.

But you are right that the big twist at the end was that the women are trying to breed out male aggression and dominance; they have sex with both soldiers and servitors, but (usually) used contraception whenever they slept with a soldier. So that, as the generations go on, a greater and greater proportion of boy-children born would be able to live as peaceful members of Women's Country.

(In other of Tepper's books, it becomes clearer that she does know about, and greatly value, men who are gentle and respectful of women. There are usually a few good male characters in each of her books --- I think Women's Country is the one where the gender divide is starkest).