This article appeared on the editorial page of today's Kansas City Star. I don't have much to say about it, frankly --- I don't know or care about David Mamet and the article itself is kind of insipid. There is one (small) passage that I saw fit to respond to, though:

"Yes," we might say to ourselves, "it certainly does seem that history has vindicated those warmongering right-wingers who opposed the Soviet Union. And really, in secret, one must admit that women and men are pretty fundamentally different. It does seem true, as well, that government programs manifestly worsen the problems they're designed to solve, whereas freedom in markets and ideas always seems strangely to improve things. ... But that doesn't mean I'm a conservative! Conservatives are mean, racist, sexist, greedy -- and they hate gay people, who are an artist's colleagues and friends! I'm nothing like that." (Emphasis mine).

I've come across this particular conservative retort to feminism in a lot of other places: they're fine with equality in theory, but those crazy feminists keep insisting that women and men are exactly the same, which is clearly absurd!
To whomever might be tempted to use that line of argument, I present these two Venn diagrams. The first one represents the typical conservative view of the relation between men and women: 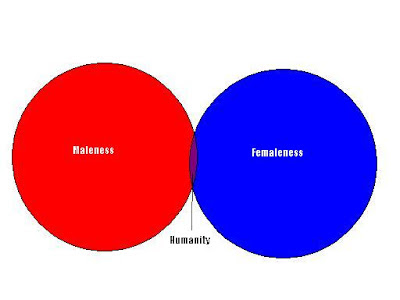 Separate spheres, separate realms of experience, with only a small token region in the middle where the two can come together and understand each other. This is in keeping with the Hobbesian underpinnings of conservatism, where people are generally looking out for #1 and are prepared to screw anyone over to further their own ends. In this universe, marriage isn't a lifelong friendship and shared commitment as much as it is a contract that binds two otherwise antagonistic parties together and keeps them honest. Women use marriage to barter sex to men in exchange for fidelity and security. The unspoken assumption is, if women and men didn't need each other (for completely separate, nonoverlapping reasons, naturally), they'd either shun each other or be eternally at war.

Now, contrast that gloomy picture with the liberal, feminist view of men and women: 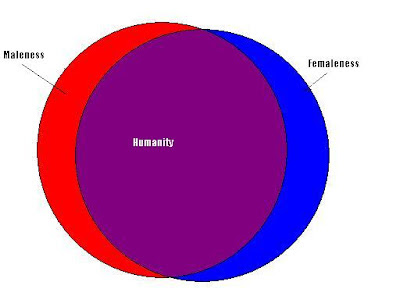