Gender Variance in Autism: How Much of It Is Just Sensory?

Gender variance in autism is a huge topic*, so I'm going to restrict this post to the ways in which autistic sensory fascinations can affect gender presentation. I do not think this is an idea that very commonly occurs to NTs, since dress for them is usually about projecting an image of themselves into the world, but for us, our decisions about what to wear are more often based on how particular textures feel than what the overall visual impression will be.

(Also, I think that when we do consider the visual effect of an outfit or accessory, the intended audience is more likely to be ourselves than any observers --- I do not think it commonly occurs to us that we will be observed**).

I don't think there are very many articles on this --- research on gender and autism tends to concentrate more on differences between male and female autistics and on the incidence of co-occurring autism and gender identity disorder than on simply describing what gender expression in autistic people looks like --- so I will stick to anecdote, and restrict this post to more of a "Please be aware that unusual gender presentation by an autistic person might actually reflect that person's sensory preoccupations, with the gendered aspects of dress or accessories being entirely incidental" public-service announcement, rather than make any attempt at definitive statements.

This 1996 article by Patricia Williams, AnnaMary Allard and Lonnie Sears describes two preschool-age boys with autism who like to dress up in feminine clothing and wear towels or T-shirts on their heads to simulate long hair. The authors did not see fit to categorize them as having gender-identity disorder, preferring to explain the dress-up games as arising just from those boys' particular autism:

Perhaps even more likely [than the boys' having gender-identity problems] is that the described cross-dressing represents an unusual preoccupation in these children with autism. ... This preoccupation may relate to a need for sensory input that happens to be predominantly feminine in nature (silky objects, bright and shiny substances, movement of long hair, etc.).

From the opposite end of the gender spectrum, we have Dawn Prince-Hughes in Songs of the Gorilla Nation, describing how she looked dancing in clubs in 1980s Seattle:

...I had noticed during my first years on my own that my aloofness converged with the times --- the "me" generation 1980s --- to forge an illusion that I was very cool indeed. Another component of my "mystique" was my appearance: I wore leather jackets because their weight and thickness calmed me; dark glasses, sometimes even at night, because they cut out some of the stimulation to my nervous system; and heavy boots that made me feel secure and grounded as I clomped around in them. I must have looked like a perfect practiced stud with all the trimmings, but in reality I was withdrawn and armored primarily out of anxiety and confusion.

Prince-Hughes's wardrobe performs a dual function: it wraps her in textures and sensations she finds pleasing (the feel of leather, the weight of the boots) and also shields her from unwanted sensory inputs that might overwhelm her. This is an elegant solution that allows her to go out to clubs, dance and enjoy herself rather than sink into overload (a problem I frequently have on dance floors); how other people perceive her hardly enters her mind.
For me, dress and adornment provide outlets for multiple sensory fixations: I wear mostly long pants, preferring soft textures like velveteen or corduroy or, for shirts, soft knits or smooth, silky materials; I tend to cover up extensively to protect my skin from unwanted sensation; and I accessorize like a mad magpie. I've got a particular fascination with shiny objects, so when I wear lots and lots of gaudy jewelry, especially rings (which I often do), I often hypnotize myself looking at them as my hands move through the air. I also like to wear long, trailing skirts, the movement of which I find soothing. The femininity of these clothes is somewhat at odds with my persona and self-concept, which are both quite masculine. 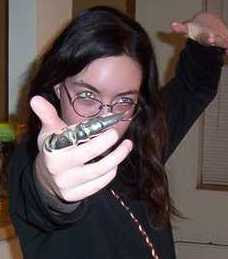 *My own hypothesis about why there seems to be a lot of unusual gender expression in autistic people is fairly simple: gender is essentially a continuous improvised performance of a role whose nature is never explicitly communicated to you, and whose script you have to pick up from subtle social cues, starting in childhood. It's probably the single most intensively-socialized thing humans do, and the one whose "rules" are the least explicit. Since autistic people are notoriously resistant to socialization, it just makes sense that we wouldn't pick up as much of the gender programming as NTs do.

** This is tricky to explain to NTs, because it seems to imply that we (however many autistics share this thought) believe we cannot be seen. No, it's just that we fail to realize that anyone is looking. In my experience, people around me blend seamlessly into the rest of the environment, melting into a sort of amorphous soup of shape, color, noise and movement rather than standing out as conscious beings. Some autism theorists point to this, and things like this, as evidence that autistics lack a "theory of mind," which I think misses the point somewhat. Of course I know people have beliefs, thoughts, feelings and whatever, and I possess sufficient imagination to come up with what they might be. It's just that my perception does not separate human-made stimuli from other, environmental stimuli. If you're talking to me, I cannot pay any more attention to you than I pay to other conversations, traffic noise, the wind, the patterns of light and shadow, birdsong or insect buzzing. This is not because I do not realize you're a conscious being trying to interact with me, but rather because my mental processing lacks the power to filter its input.
Posted by Lindsay at 5:41 PM

Sorry for not getting round to commenting on this for so long. I think there is a LOT of truth in this, especially this bit:

"My own hypothesis about why there seems to be a lot of unusual gender expression in autistic people is fairly simple: gender is essentially a continuous improvised performance of a role whose nature is never explicitly communicated to you, and whose script you have to pick up from subtle social cues, starting in childhood. It's probably the single most intensively-socialized thing humans do, and the one whose "rules" are the least explicit. Since autistic people are notoriously resistant to socialization, it just makes sense that we wouldn't pick up as much of the gender programming as NTs do."

I'm in a discussion with Lisa Harney here about gender which i think has some relevance, especially with regard to the issue of what actually constitutes "gender identity".

I also posted about gender identity myself here.

I think there is a possibility that the "brain sex at variance with body sex" aspect of gender dysphoria is likely to be co-morbid (urgh i hate that word...) with autism, simply due to them both being abnormalities of brain development.

However, the other component, the social construct of gender, is what it seems you're primarily talking about, and i am *certain* that sensory issues in dress and the like play a role.

I *appear* fairly gender-normatively male, despite not in any way identifying as such, simply because the kinds of clothes i wear (ie, hardwearing, shapeless and comfortable) get gendered as "male" due to the sexist society we live in, whereas the reasons i choose them have nothing at all to do with aesthetics, and everything to do with comfort and practicality.

(It does kind of annoy me that, for me, because i am bio-male, being gender-normative in appearance is easier than being gender-transgressive, when it seems to be the opposite for women...)

This is one of the reasons that the whole "extreme male brain" theory of autism pisses me off, because on so many (more or less frivolous) gender identity "tests" i have done online, the things that i know i got "male" results from ticking were things that, *for me*, were not "male" things at all, but autistic things that, for some reason, our society identifies as "male" things...

I will probably come back with more responses...

I think there is a possibility that the "brain sex at variance with body sex" aspect of gender dysphoria is likely to be co-morbid (urgh I hate that word) with autism, simply due to both of them being abnormalities of brain development.

I actually found an article that explored that very question (whether transgenderism is more common in autistic people), and plan to do a post on it sometime soon. I also intend to do one about the Extreme Male Brain theory, because that one bugs me a lot, too, only less because many autistic traits are gendered male (though many are) and more because most autistic traits seem to me to be equally at variance with typical male or female traits.

"I think there is a possibility that the "brain sex at variance with body sex" aspect of gender dysphoria is likely to be co-morbid (urgh i hate that word...) with autism, simply due to them both being abnormalities of brain development."

Just a wild theory, as I have no evidence whatsoever for this...
I wonder if some autistics might feel that people expect them to be different from how they are and not know why, and fix on some areas in which they are more typical of the opposite gender in their behavior, and interpret their feeling of 'not fitting' as being related to gender identity? So just as autistic asexuals often think they're gay because that's a more well-known explanation for differences in sexual orientation, some might think they're transsexual because that's a more readily known explanation for a disjoint between identity and the expectations of others?

Genial dispatch and this post helped me alot in my college assignement. Thank you as your information.