How *NOT* to Do Superhero Halloween Costumes

What could be more awesome than having a wider selection of ready-to-wear Marvel superhero costumes? Well, like Comics Alliance's Nick Nadel writes, it'd be a lot more awesome if these costumes actually looked much like the characters they're supposed to portray.

For example, there are three characters in the Marvel universe who might be considered female equivalents of Spider-Man: first, there's Spider-Woman**, who looks like this: 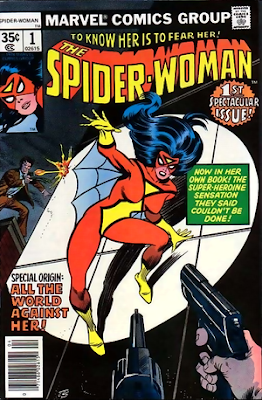 There's also Spider-Girl, who was introduced in a "What If?" one-shot comic, as the superpowered daughter of Spider-Man and his true love Mary Jane Watson. She dresses more or less exactly like her father does, in the blue-and-red spider suit: 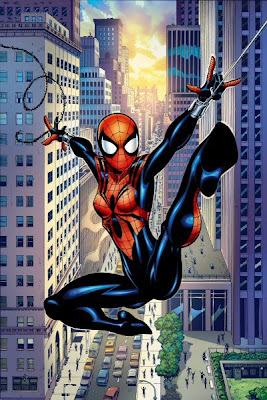 Finally, there's Araña (Spanish for "spider"). She's a teenage girl with spider powers, and she dresses in street clothes with a spider motif: 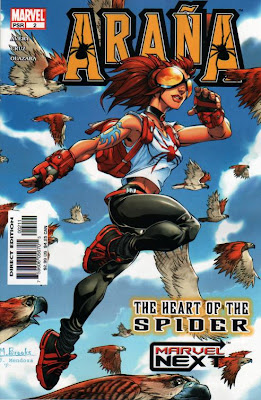 None of these amazing characters look even a little bit like this, however. 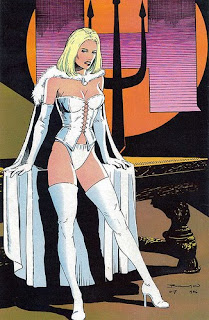 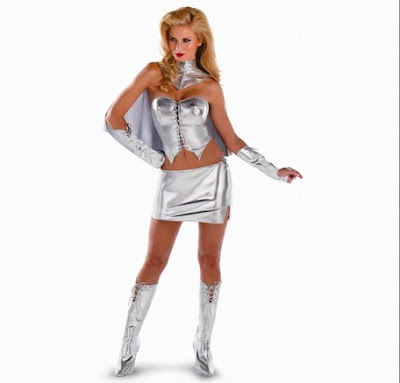 But the most WTF-inducing part of that article, for me at least, was this.

Sexy Venom?! That really, really does not compute.

It does not compute, because Venom looks like this: 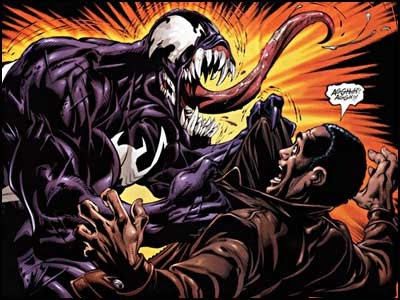 You try to make that cute and attractive, and I'd argue you lost sight of the essence of the character a long time ago.

(In answer to your no-doubt-unasked question, "What's even more hilaristurbing than a Sexy Venom costume?", I give you a commenter at Comics Alliance's assertion that the blonde young woman modeling the Sexy Venom costume is none other than Carrie Prejean, Miss Anti-Gay California herself. How weird is that?)
*I was only able to find one of the costumes --- this one, the Sexy Cheerleader version of Captain America with the shield maybe a third the size of the one the model is holding --- on Marvel's own website, so it looks like the Women of Marvel line is mostly Disguise Costumes' brainchild. The Comics Alliance article gives the impression that Marvel is involved, but Disguise's website just says the costumes are "inspired" by Marvel superheroines, and you'd think that if Marvel had any role in designing the costumes, that they'd also be selling them on their site, which they're not.

**There have been multiple Spider-Women over the course of Marvel canon, but I am referring to Jessica Drew, the first, current and --- I believe --- longest-running holder of the title.
Posted by Lindsay at 10:07 PM

Those are truly horrible. The Venom one did make me laugh, tho... mainly because i reckon someone like Trinity (of The Strangest Alchemy) could do a *genuinely* sexy Venom... ;)

BTW, did you know that Marvel has been bought by Disney?

Another reason to be a home sewer.

The dumbest thing to these sexified superhero costumes is that there are already countless Marvel heroines and villainesses who wear very revealing costumes, so the costume makers could at least work canon into their lowest common denominator products if they're going to use the Marvel license. At least they did Emma Frost, but Psylocke, Tigra, Scarlet Witch, Shanna the She-Devil, Valkyrie, the Enchantress, Madelyne Pryor, Mantis, and Sue Storm's mid-90's train-wreck look are just some of the many titilating Marvel women's costumes that at least appeared in a Marvel story at some point.

There's also the fact that men wouldn't be subjected to these sorts of costumes ( unless they did costumes of Colossus, Hercules, Namor, and Frank Quitely's Wolverine look )

I was going to do a (mostly pictorial) blog entry about that, with drawings of various Marvel characters acting out Disney stories (like, Gambit slipping a glass slipper onto Rogue's foot, Phoenix in the glass box Snow White sleeps in once she's eaten the poisoned apple, and of course the Beast dancing with Belle). But I drew one of them (the last one) and got tired of it, so none of them got posted.

Yes, I do think Trinity could pull of Sexy Venom. But her idea of what sexy is works much better in that context than the one shown here.

@NTB:
"There's also the fact that men wouldn't subjected to these sorts of costumes (unless they did costumes of Colossus, Hercules, Namor and Frank Quitely's Wolverine look)."

Funny you should mention that!

Comics Alliance also did a list of superhero costumes that would be objectifying men, and Namor and Hercules were on it.

As was Wolverine as he appears in the "Weapon X" limited series, i.e. naked except for an ungodly amount of tubes and weird electronic devices taped to him in strategic places...

Thank you for the link, Lindsay. I have to disagree with some of the choices there, specifically Dr. Manhattan; not only because it's not titilation because his package is on full display, but because his nudity was a sign that he was so ascended in consciousness that he didn't even care about pants.

Also, I think Colossus deserves a spot. Especially since Peter's so modest and bashful about his sexuality; even though he wore a costume with a flimsy triangular top and hip-length stripper boots, he was completely shocked by America's depictions of sex, and even declined Kitty's advances when they were dying in the middle of outer space together. Which would just make him more attractive to a heterosexual woman or homosexual man ( of which I am neither, but still... )

Ugh, sexy Helloween costumes are a pest. Is that a new phenomenom?
During European carnival season (early spring) the sexy costumes have been a big thing for decades, so in the last few years, when Helloween became more popular round here, I thought *finally* a day where people dress up as ugly and hideously as they can.

but because his nudity was a sign that he was so ascended in consciousness that he didn't even care about pants.

Henceforth I shall refer to being really drunk as "ascending in consciousness".

I agree that these costumes are despicable, but I still want those spider girl thing boot covers.

economically, it'd be really hard to replicate the actual super-heroine costumes with the shitty polyvinyl that they make those costumes.

not that you'd want to be trapped in the sweaty hell that that spidergirl costume would be.