I love Halloween. It's always been my favorite holiday, for lots of reasons. Anymore, my primary mode of celebrating it is to carve outrageous jack-o'-lanterns, the bigger the better.
Here's this year's entry in the "Holy $#?! that's a huge pumpkin" arms race with myself, being interrogated by two of the cats. 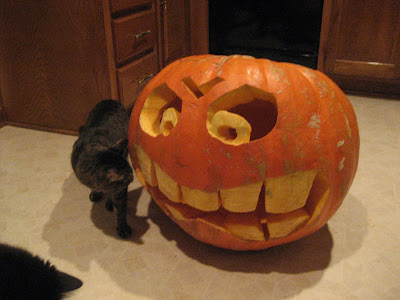 You can see they're a bit mystified as to what manner of thing the humans have brought them this time. (The third cat loathes the smell of pumpkin, so she fled the scene).

Boots (the black-and-white one pictured above) was able to discover fairly quickly that this pumpkin was big enough for him to jump into: 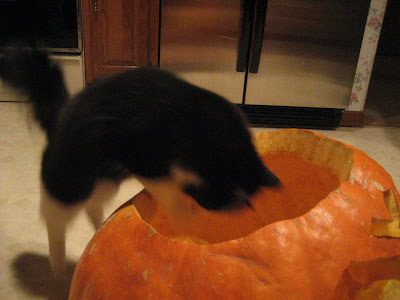 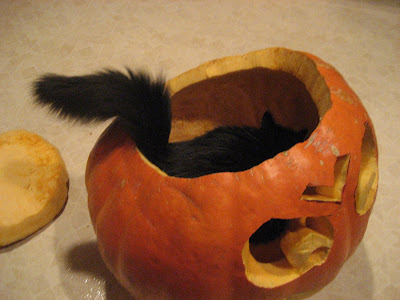 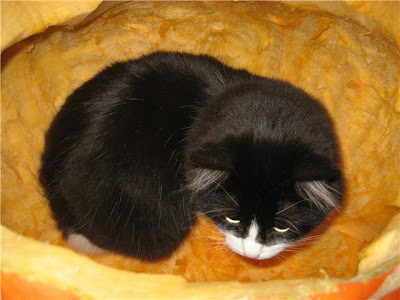 Of course, it didn't take him very long after making this discovery for him to lose interest entirely and wander off, as cats will do. But he made this very eloquent expression of disdain before he left: 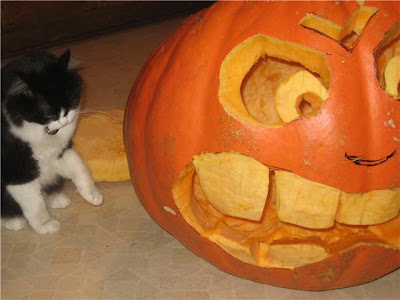 Aww... I love those pictures. They're so cute. I can understand your liking to take pictures of your cat in moments of cuteness. I do the same thing with my younger cousins and siblings. I have as the background for my cell phone a picture of my youngest cousin at 7 1/2 months opening up a present that I made and wrapped for him (it was a crocheted blanket that was so big that it could cover an adult).

You cat is adorable. These photos are real good. My cat would absolutely climb into the Jack-o-lantern. The more out of the way I put it, the more she would be intrigued and she'd climb anything to get to it.

Hee! That is a most impressive jack-o-lantern. I find that "carve away the orange bit but leave some of the yellow bit to emphasize detail" method really intriguing though I'm not sure what the best tools are to use for that, so haven't really tried it myself. That is definitly one big scary face on yours, though -- the TEETH!

Also, while blurry, the action shot of the cat jumping into the pumpkin is awesome. :D I love the curiosity of cats, and I have definitely noticed many of them like to jump into things or sit in small boxes, etc.

When I carved my pumpkin this year (am also a big Halloween fan here -- for the pumpkins partly, but in my case mostly because I like being able to go to work, etc., in full gothic dressup mode) I was sitting in the hallway outside the bedrooms where the kittens were playing. Shadow, the newbie, didn't come out of his bookshelf cabinet during this process (he loves attention but is still a bit shy about coming out of the spare room on his own) but Coraline and Brodie were staring at me and sniffing around the area where I had the pumpkin. They never got close enough to jump in (or on...) but they liked it when I was flicking pumpkin seeds at them -- they batted them around on the floor, licked them, and chased them like toys.

Great photos! I like the pumpkin, and am tempted to become a catnapper. :)

One or more of our cats knocked a jack-o-lantern out of the front window, and I still need to clean it up. That's not going to get any better for the waiting. :-|

AnneC, I use a paring knife to carve away the outer skin of the pumpkin --- it's sharp enough to get under the skin, small enough for fine detail work, and nonserrated, so it leaves a relatively smooth surface when it peels.

It's easiest to do the peel-away-the-orange method on a really huge pumpkin, because the shell is so thick. You can make mistakes and it's not the end of the project, because you can just whittle it down further and start over.

(This pumpkin weighed maybe 90-100 pounds when it was full, and was still fairly heavy when gutted.)