By the Numbers: Autiebiography and Gender

EXECUTIVE SUMMARY: I did some research to try to identify every autobiography ever written by an autistic person, of which the first seems to be David Eastham's 1985 book of poetry Understand. I tabulated the number of autobiographies by male vs. female authors from 1985 to 2009 (see graphs below) and found that those numbers were very close to equal. There were slightly more books by male authors overall, and within every five-year interval within the period I looked at. The total number of books being written also increased dramatically in the early 2000s, peaking in 2003.
_______________________

Ever since I first started reading autobiographical works by other autistic people, I noticed that most of the books I saw fitting this description had been written by women.

While this was a bonus for me, being an autistic girl and mostly wanting to read about other girls, it did register as odd that so many of these chroniclers of their autistic childhoods should be female, when so many more men and boys than girls and women have diagnoses of autism, and when autism is so widely understood as a boy thing.

So now, with the help of Google and Amazon.com, I've decided to see if this preponderance of Lady Autism Writers really existed, or was an artifact of my choosing to read more women's stories.

As far as I can tell, every first-person narrative ever written (as of now) by an autistic person identifying themselves as such, is represented as a dot on this timeline:

You can see that, quite contrary to my initial belief, there isn't any such preponderance of autistic women's autobiographies at all! At every point along the timeline, there are either a) approximately equal numbers of books being written by men and by women, or b) slightly more being written by men.

Overall, too, slightly more are written by men, as this second graph shows: 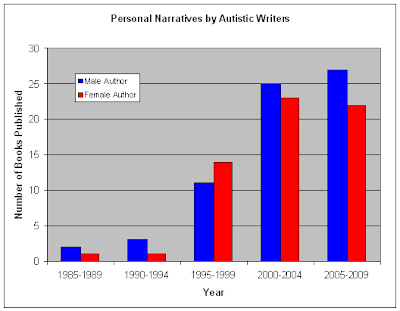 You might argue that this is still an overrepresentation of female autistics, since there's only supposed to be one of us for every four male autistics, and I'd go along with that, although with the caveats that we're still not sure how much of the gender gap is due to diagnostic biases favoring men and boys, and that autistic autobiographies include the stories of people who were not diagnosed until middle age --- a group that probably has a male/female ratio closer to 1:1.

(Why should I have perceived an imbalance when none really existed? Well, part of the reason might be the selection bias I already mentioned, but Amanda Baggs names some other factors that might help to give lots of people this impression: books by male authors tend not to be as well known --- there's no male equivalent of Temple Grandin, for instance --- and to be self-published or published by very small and obscure publishing companies, and to go out of print. Amanda also mentions that most of the non-speaking authors are male; that may also contribute to the male authors' relative obscurity).

I figured there were more books by women, too, probably because the books written by women were easier to find.

Interesting. I haven't read many "autiebiographies" (am i the only one who thinks that's a really horrible, trivialising-sounding word?), but i do very much have the perception that there are a far greater number of female (or at least female-assigned-at-birth) autistic bloggers than male(-assigned) ones. That may also be a skewed perception, i don't know - it would be interesting if a survey of sex/gender in autist blogs had ever been done...

I don't think it's a trivializing word; I was under the impression it was coined by an autistic writer (Donna Williams?) to describe the kind of writing they did. That seems to me like it makes a difference: a term like that would indeed be trivializing, and marginalizing, if it were applied by non-autistic people to all autistic people's writing (sort of like how fiction books written by women tend to get ghettoized as "chick lit"), but since it is a word mostly used by autistic people to describe (a subset of) our own writing, I don't think it has the same insulting connotations that it would if it were a label imposed from outside.

About doing a thing like this for blogs rather than books: I agree, it *would* be interesting! I'm considering doing that, too, but am not sure how I'd know if I had found them all!

Most of the complaints I've seen about there allegedly being more autobiographies by women seem to come from a "but what about the mens" perspective. Mostly from the same people who claim that autistic women "have it easier" and whine that autistic men have it so much harder because "women have an easier time getting dates and sex." (If you consider "getting targeted by predators" to be an acceptable synonym for "finding dates," and "being sexually assaulted" to be an acceptable synonym for "getting sex." Because autistic women, and disabled women in general, certainly have an easier time "getting" both of those things than the general population. I don't claim to be presenting myself as any statistically typical example, but all the relationships I've had with NT men were heavily exploitative from their end. "Oh, she's naive, I can take advantage of her." And it just makes me see red to think that someone whose view of the world is utterly saturated with male privilege would construe that as "having an easier time finding relationships." I didn't even have an understanding, when they were going on, that I so much as had the right to turn anyone down.)

@Julian^Amorpha, I've had that experience, too, with the super-exploitative "relationship" (which luckily for me has been only one) with a total stranger whom I didn't even know I could refuse.

I thought I would hurt his feelings if I said no, so I never did. Extreme naivete and nice-girl socialization do *NOT* mix well together, as I'm sure you've had to find out as well.