EXECUTIVE SUMMARY: This is a review of hard-science-fiction writer Larry Niven's 1983 novel The Integral Trees. The book is excellent in the ways I've come to expect excellence from Niven --- imaginative world-building, exciting plot, clever application of physics and engineering principles --- but it also surprised me by being a lot better than his books usually are at characterization, particularly its representations of women. It also astonished me by having about half of its main characters --- including one who I consider the novel's most heroic character --- be people with disabilities. In fleshing out these characters, Niven manages to avoid "supercrip" and "bitter, angry cripple" stereotypes, and also to show the role that environment plays in disabling or empowering people with disabilities.
________________________________ 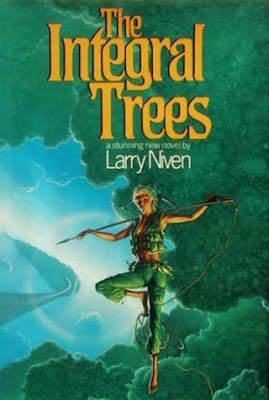 Like a lot of science-fiction writers of his generation, Larry Niven is sexist. While this does annoy me when it shows up in his work, I also find enough to like in his writing to keep reading him.

(With Niven, the thing that makes me consider myself a fan is the hugely imaginative worldbuilding, backed up with just enough real-world physics to make you suspect that whatever fantastical setup you're reading about might actually be possible).
The Niven book I've read most recently, The Integral Trees (first written in 1983), met my expectations in the originality and skilled, thoughtful realization of its central concept --- a "world" lacking a planet, composed instead of a huge gas torus surrounding a neutron star, which itself orbits another star --- and greatly exceeded them in its rendering of female and disabled characters.
First of all, The Integral Trees surprised me just by having lots of major characters with disabilities, as this is not a thing that happens very much at all in science fiction*.
The plot revolves around a small party of nine people, sent on a reconnaissance mission up the trunk of the enormous floating tree that houses their village to look for potential sites to build a new village, as food is becoming scarce at the old location. (They depend on what blows by them on air currents, along with what little they find growing on the tree itself, for food. While a little gardening is possible on the tree, there's not enough of anything resembling soil in this airy world to support self-sufficient farming communities). Because the village's Chairman is pessimistic about their chances of survival, the scouting party is sent out less as a serious attempt to re-establish the village than as a pretext for getting rid of everyone the Chairman considers a useless eater.
Accordingly, the scouting party is composed of a pretty unlikely bunch of heroes: aside from the leader, who is a skilled hunter who's been exiled for mostly political/interpersonal reasons, most of the intrepid explorers are people with disabilities.
In this passage, the main character, Gavving, surveys his comrades-to-be:

The Grad had long been Gavving's friend, but he wasn't much of a hunter. And Merril? Merril would have been a big woman if her tiny, twisted legs had matched her torso. Her long fingers were callused, her arms were long and strong; and why not? She used them for everything, even walking. She clung to the wicker wall of the Commons, impassive, waiting.

One-legged Jiovan stood beside her, with a hand in the branchlets to hold him balanced. Gavving could remember Jiovan as an agile, reckless hunter. Then something had attacked him, something he would never describe. Jiovan had returned, barely alive, with ribs broken and his left leg torn away, the stump tourniquetted with his line. Four years later the old wounds still hurt him constantly, and he never let anyone forget it.

Glory was a big-boned, homely woman, middle-aged, with no children. Her clumsiness had given her an unwanted fame. She blamed Harp the teller for that, and not without justice. There was the tale of the turkey cage; and he told another regarding the pink scar that ran down her right leg, gained when she was still involved in cooking duties.

The hate in Alfin's eyes recalled the time she'd clouted him across the ear with a branchwood beam; but it spoke more of Alfin's tendency to hold grudges. Gardener, garbage man, funeral director ... he was no hunter, let alone an explorer, but he was here. No wonder he'd looked bereaved.

Jiovan has one leg; Merril has none and walks on her hands. Glory is so clumsy she's exempted from most everyday physical tasks that villagers normally share. Alfin, the middle-aged and misanthropic village gardener, has a terrible fear of heights that makes it extremely hard for him to climb. The other four characters --- Clave, Gavving, Jayan and Jinny --- are able-bodied.

I thought the characters of Alfin and Merril, and how they changed --- became more or less able as their environments changed --- worked surprisingly well as illustrations of the social model of disability. 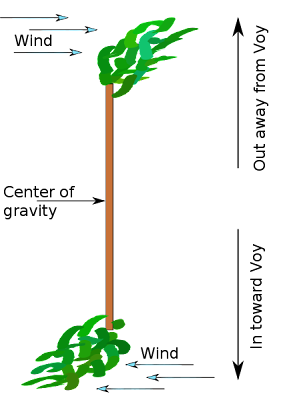 For instance, as the scouting party gets further and further away from their village, which is at one of the ends ("tufts") of the free-floating giant tree they live on, they also move toward the center of the tree, where the "tides" (forces analogous to gravity --- see here for a more detailed explanation) get weaker, until movement becomes so effortless that Merril and Jiovan no longer have to work harder than everyone else to cover the same distances; it's as easy for them to flit around in near-free-fall conditions as it is for the characters with two working legs to do so.
Merril takes particular joy in this development:

She was holding herself an arm's-length from the bark by a one-handed grip. He shouted down. "Merril? Are you all right?"

"I feel wonderful!" She let go and began to fall and reached out and caught herself. "The Grad was right! We can fly!"

Gavving crawled toward her. Jinny was already below her, pounding in a spike. When Gavving reached them, Jayan was using the spike for support, with her line ready in her other hand. They pulled Merril back against the tree.

She didn't resist. She crowed, "Gavving, why do we live in the tuft? There's food here, and water, and who needs legs? Let's stay. ... I've eaten enough foliage to last me the rest of my life! But if anyone else wants it, we'll send down someone with legs."

Eventually, the tree they've been living on splits apart, and they have to jump out into the empty sky; into free-fall. There, Merril thrives even more. The group faces all sorts of terrible dangers --- they're accosted by raiders from a hostile neighboring tribe right before the tree splits; their leader, Clave, is gravely injured; when they make their way into a huge free-floating "jungle" of diffuse, mosslike airborne vegetation, they're attacked and captured first by the jungle's giant-sized inhabitants and later by slave hunters in a spaceship --- and consistently Merril's bravery, determination and resourcefulness help get the group out of trouble.
The book is a bit less consistently successful in its portrayal of (non-disabled) female characters: yes, there are a lot more women in The Integral Trees than there are in most Niven books, and they do all sorts of cool things --- there's a female naval officer and scientist-in-training among the technologically advanced people who trawl the jungle for slaves; among the people living in the jungle, women fight alongside men as soldiers, and most of the people Merril, Clave, Gavving et al. end up helping to fight the slavers are female; and finally, much earlier in the book, the tribe living on the opposite tuft of the tree from Gavving's village employ all-female hunting parties (the hunting party that accosts the protagonists right before the tree breaks apart even includes a trans woman) --- but there's still a lot of sexual objectification of female characters. The worst offenders in this regard are Jayan and Jinny, the twenty-year-old, identical twin girlfriends of alpha-male scouting-party leader Clave. (That's why Clave was sentenced to lead this wild-goose-chase: he had been married to the daughter of the village chairman, but she was apparently such a nagging shrew that he couldn't stand to live with her, so he left her and took two younger, prettier, nicer more compliant girls to replace her).
*A notable exception to this rule would be the subgenre of science fiction set post-nuclear-apocalypse, usually written during the '50s and early '60s, at the height of the Cold War. With those, you usually see lots of characters with congenital disabilities or deformities, always attributed to fallout from the bombings. These characters are rarely treated as fully human, though --- their disabilities make them monstrous and Other in their authors' eyes.
Posted by Lindsay at 9:47 PM

Thank you! I remember enjoying the heck out of these books, but I didn't remember these details.