EXECUTIVE SUMMARY: Earlier this year, a group of psychologists and neuroscientists published a paper showing a relationship between alexithymia (difficulty identifying and expressing feelings) and lower levels of activity in a part of the brain that previous studies have linked with the capacity to feel empathy for another person. They did not find any such relationship between autism and decreased activity in this region of the brain, although autistic people do experience alexithymia at much higher rates than the general population. This paper builds on a similar article from 2008, by most of the same authors, that sought to measure autistic people's levels of emotional self-awareness by, first, measuring their self-reported levels of alexithymia and empathy, and then having them undergo fMRI scanning while looking at, and reporting their response to, strongly emotionally charged images. That study's results were somewhat ambiguous, since there wasn't a group of strongly alexithymic subjects who were not autistic, so, while levels of alexithymia were shown to correlate with reduced brain activity in both the autistic and control groups, there were also some differences between the autistic group's results and those of the control group that might result from multiple factors. The later study seems to suggest that much of this difference arises from the autistic group's higher overall scores on measures of alexithymia.
_____________________________________

Emotions --- whether they're one's own or another person's --- are widely believed to be terra incognita for autistic people. Many of us believe this about ourselves; Data and Spock are the "Star Trek" characters in whom autistic fans tend to see themselves.

To a degree, this is true of us more than it is true of non-autistic people. We have much higher rates of alexithymia --- the inability to put emotional states into words --- than the general population. Just because we can't talk about what we're feeling doesn't mean we don't understand it, though; it just means we have a much harder time explaining it to other people. (Also, even when we're not alexithymic, it's fairly common for autistic people to have all sorts of problems with language in general). It's also made even harder by the fact that the kinds of things that we feel tend to be a lot different from the kinds of things non-autistic people are likely to feel in any given situation. We are usually very much aware that our experiences are different from theirs, even if we might not have much of an idea how they might differ.

I've already discussed the role of shared experience, or lack thereof, in the "empathy gap" between autistic and non-autistic people. (Other people have, too). What I'm going to do in this post is discuss two recent fMRI studies comparing brain activity during tasks designed to elicit empathic emotional responses between groups of autistic and non-autistic study participants.

Both of these studies start from the assumption that autistic people really are objectively impaired at picking up on emotional cues, and seek to identify neural and psychological factors specific to autistic people that might explain this.

The first study --- Silani et al., 2008 (full text here) --- involved two groups of fifteen participants (thirteen men and two women), one made up of people with diagnosed autism-spectrum conditions and the other of age-, sex- and IQ-matched controls. The researchers had both groups fill out several questionnaires --- the Toronto Alexithymia Scale (TAS-20), the Bermond-Vorst Alexithymia Questionnaire (BVAQ-B) and the Interpersonal Reactivity Index (IRI) --- and then look at images on a screen and evaluate something about them on a sliding scale (either their own emotional response to the image, or the balance of light and dark colors within the image) while having their brain activity measured by fMRI.

In their Introduction, the authors propose a three-tiered model of emotional experience: the first layer is the emotion itself, and the changes in mental and physical state associated with it (e.g., racing heart, sweating, agitation, excitement, shivers, lethargy or tears); the second layer is the awareness of what is happening to you physically; and the third is awareness of the emotional reasons for what is happening to you physically. They cite previous fMRI studies (and reviews) implicating the amygdala and orbitofrontal cortex in first-order emotional experience, and the anterior insula and anterior cingulate cortex in what they call "interoceptive awareness" --- awareness of bodily changes, including those brought on by emotions.

They didn't find very much different between the autistic and control subjects' patterns of brain activity, and the major correlations they established --- between low scores on the alexithymia indices, high scores on the empathy index, and higher levels of activity in the mid-anterior insula during the emotion-rating part of the experiment --- held equally true for both groups of subjects. The autistic participants also showed a correlation between those test scores and increased activity in the left amygdala; no such pattern occurred, even to a diminished extent, among the non-autistic ones. Another area of the brain --- a circuit consisting of the medial prefrontal cortex, anterior cingulate cortex, precuneus, frontal inferior orbital cortex, temporal poles and cerebellum, collectively called the "mentalizing network" --- also lit up during this task, and showed lower overall activation for the autistic group than for the control group, although its activity was not correlated to either measure of alexithymia, which surprised the researchers.

The second study --- by Bird et al., 2010 (full text here) --- was designed to try to make the relationship between autism, alexithymia, cognitive empathy and emotional empathy a bit clearer. It involved two groups of eighteen men: one whose members all had diagnoses of autism or Asperger syndrome, and most (13 of the 18) of whom also met Autism Diagnostic Observational Schedule (ADOS-G) criteria for either autism or autism-spectrum disorder; and another group of neurotypical men matched with the experimental subjects for age, IQ and degree of alexithymia. Within both groups, participants ranged from low scorers to very high scorers on the Toronto Alexithymia Scale (TAS-20): within the autistic group, scores ranged from 37 to 80, with a standard deviation of 11.8 and an average score of 57.2; within the control group, the average score was 50.3, the standard deviation 14.5, and the range 27 to 72. A TAS-20 score of 60 indicates alexithymia; scores between 52 and 60 are considered borderline.

Here is the authors' own assessment of what they're trying to find out:

The experiment in the second study was actually kind of disturbing: they tried to measure empathy directly --- rather than relying on self-reported answers to questionnaires --- by having the participants bring someone they cared about into the lab with them, and then tracking their brain activity as that person received mild electric shocks on the back of their right hand.

I hadn't thought researchers were allowed to cause pain in experiments anymore. This worries me.

Whether or not I am personally creeped out by this experiment, though, it did furnish some pretty solid evidence that it's alexithymia, and not autism per se, that dampens people's capacity to feel other people's emotions as if they were their own. 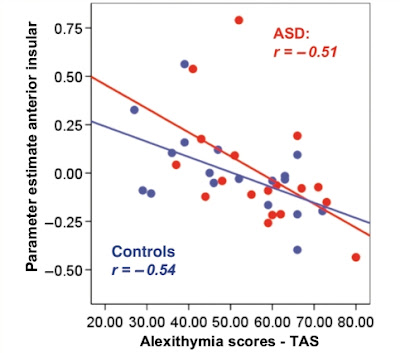 Among members of both groups, seeing their partners in pain (before one member of each pair was to be shocked, a symbol would appear on the screen in front of them telling them who the unlucky person was and how intense the shock would be, so the researchers had a way to compare their subjects' reaction to different levels of vicarious distress) triggered activity in the left anterior insula, which intensified in proportion to the severity of the shock their loved one was getting. That activity --- the "empathic brain response" the researchers are talking about --- also correlated negatively with the subjects' scores on the alexithymia questionnaire: the more alexithymic the men in either group were, the less intense their brain activity in response to their loved ones' pain was.
Besides shoring up the hypothesis that alexithymia (or whatever its absence is called --- lexithymia?) has something to do with empathy, this newer study also throws up some roadblocks on the free-association superhighway pop psychology has built between autism (particularly Asperger syndrome) and lack of empathy.
After correcting for degree of alexithymia, all significant between-group differences in brain activity vanished. The researchers also looked for a correlation between degree of alexithymia and severity of autistic symptoms as measured by the ADOS, and found none:

So, autism and alexithymia are distinct, unrelated, though overlapping things, and only one of them --- alexithymia --- seems to have any bearing on affective empathy. (Cognitive empathy might be a different story; questionnaire data from both studies show significant differences between autistic and control subjects on subscales specific to cognitive empathy/Theory of Mind, like the perspective-taking subscale on the Interpersonal Reactivity Index and the cognitive component of the Bermond-Vorst Alexithymia Questionnaire. There's still plenty to criticize about this measure of empathy, too, particularly its one-sidedness, but that's not the focus of this post).
Bird, G., Silani, G., Brindley, R., White, S., Frith, U., & Singer, T. (2010). Empathic brain responses in insula are modulated by levels of alexithymia but not autism. Brain, 133 (5), 1515-1525 DOI: 10.1093/brain/awq060

Now I want to add the TSS to my website. :) Is it available online anywhere, do you know?

I went to the library to check out the two alexithymia scale papers, and as far as I could see, they didn't actually include the scale items in the papers. (I just skimmed, though.) So that's two less scales to add to my website. :p