CNTNAP2 is, according to Entrez Gene, one of the largest single genes in the human genome; it's about 2.3 million base pairs long, taking up 1.5% of the total space on chromosome 7.

What does it do?
CNTNAP2 encodes a cell-adhesion protein called contactin-associated protein-like 2 (Caspr2), which is part of a superfamily of adhesion proteins specific to nerve cells called neurexins.

During development, Caspr2 plays an important role in organizing the long tail of the neuron, called the axon. Caspr2 directs certain types of voltage-gated potassium ion channels (i.e., channels that open or close in reponse to changes in membrane potential) to insert themselves into the axon's membrane at specific intervals; it also forms part of the junction between the axon and the fatty glial cells that form the myelin sheath around the axon, which both insulates the axon (like the rubber tubing around a wire insulates the wire) and allows the electrical current to travel faster, in a discontinuous, hopping ("saltatory") manner from node to node along the myelinated axon. 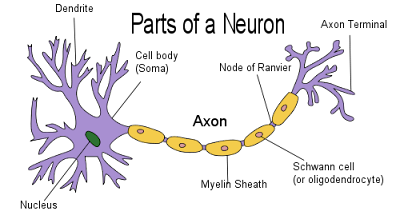 (Image adapted from
Wikipedia)
To allow the current to travel discontinuously, the fatty cells making up the myelin sheath leave small stretches of axon uncovered at regular intervals. These unmyelinated points are called the nodes of Ranvier, and it is at these nodes that Caspr2 plays its traffic-directing role.

(Node of Ranvier and surrounding regions; taken from Figure 4 in Poliak and Peles, 2003)

Caspr2 sits in the membrane of the axon in its juxtaparanodal region (which means, "the region right next to the region next to the node" in ScienceSpeak), where its cytoplasmic domain (the part of a membrane-spanning protein that's inside the cell) links up with potassium ion channels prior to their insertion in the membrane, and directs them to insert adjacent to the complex of adhesion proteins including Caspr2. This ensures that the potassium channels all cluster together in the juxtaparanodal region, rather than distribute themselves more or less evenly along the axon, as they would do without guidance from the adhesion proteins.
This superabundance of potassium ion channels near the nodes of Ranvier makes the nodes hypersensitive to membrane depolarization (which is mediated by traffic of ions, including potassium, into and out of the cell), which allows an action potential (the "firing" of a neuron that happens once it reaches a certain threshold level of membrane depolarization) to be transmitted from node to node more easily.

This gene may also play a role in organizing the layers of cortical tissue during development.

What mutant versions of this gene have been discovered?

Lots of different ones! Here are (some of) the mutations that have been described so far:

An exchange of genetic material between two chromosomes: 7q35 and 15q26.2, with the breakpoint on chromosome 7 occurring inside CNTNAP2 (in the 11th intron, or noncoding region), and the breakpoint on chromosome 15 occurring in a relatively ill-understood region that's hypothesized to be a gene. This translocation was found in three generations of Old Order Amish, and described in this article in the European Journal of Human Genetics. Depending on whether the translocation was balanced or not (i.e., whether there was any net gain or loss of genetic material), the people having this mutation might be completely healthy and neurotypical, or they might have severe problems and die young.

An autistic woman in Italy was found to be missing a large (12 million base pairs!) chunk of chromosome 7q33-q36; CNTNAP2 is contained within the deleted region.

An autistic boy in the Netherlands was found to have an inversion --- a break in the q arm of one of his copies of chromosome 7 that reversed the sequence of genes on the broken part when it repaired itself --- between regions 7q32.1 and 7q35. Parts of CNTNAP2 --- the promoter region, which is where the enzymes involved in DNA transcription (the first stage of gene expression) attach to the genome and begin transcription, and parts of intron 1 and exon 2, which also contain important regulatory sites --- have been moved to another chromosome entirely: chromosome 1q31.2.

A preschool-aged boy with seizures and autistic traits (but not enough to be diagnosed with an ASD) was found to have an inversion between regions 7q11.22 and 7q35. The break in 7q35 occurs within CNTNAP2, somewhere between exons 10 and 13.

Nine of eighteen Old Order Amish people with developmental disabilities and a childhood-onset form of epilepsy were found to have a deletion of a single nucleotide (#3709) in coding region 22 of CNTNAP2. The deletion was present in both copies of the gene.

A family in which several members (the father and both children) have Tourette syndrome, obsessive-compulsive disorder, or both, were found to have a complex rearrangement of genes on chromosomes 2 and 7, including some swapping of parts of genes between those two chromosomes. Among other things, part of a gene on chromosome 2 is inserted into CNTNAP2, in a noncoding region. The inserted part is very large (12 million bases, six times the size of CNTNAP2 itself).

In a fairly large sample of families including more than one autistic member, a single-nucleotide change --- a substitution of thymine for adenine --- at a position approximately one-quarter of the way between coding regions 2 and 3 of CNTNAP2 (in other words, in an intron, or noncoding region) was found to occur at somewhat higher rates in autistic children than in their nonautistic siblings. This was especially true if the mutation was inherited from the mother.

A study of 185 Han Chinese families found another single-nucleotide variation in a noncoding region of CNTNAP2 that's associated with an increased likelihood of having autism.

A study of families participating in the Autism Genetic Resource Exchange found several single-nucleotide changes near the end of the intron between exons (coding regions) 13 and 14 in CNTNAP2, where the presence of a variant nucleotide at one of four different positions (with variation at one site in particular, designated rs2710102, seeming to drive variation at the other three) was associated with delays in development of speech.

Three people (two of them siblings) who had undergone genetic testing for a separate mutation (in a gene called TCF4, the underexpression of which causes Pitt-Hopkins syndrome) were found to have deletions in CNTNAP2; the two siblings were missing exons 2-9, and the other person was missing exons 5-8, and had another mutation rendering a splice site (a place where various enzymes cut out those parts of a transcribed gene that are not needed in protein synthesis, and then join the remaining fragments back together) potentially invisible to splicing enzymes, which could mean that exon 10, also, has been functionally deleted.

How do these mutations affect protein function?

(Drawing of CNTNAP2 exons and the protein domains they encode taken from Zweier et al., 2009)
A mutation's effect on protein function depends on where it is in the gene. The color-coded map I posted at the top of this section shows what kind of protein domain each coding region of CNTNAP2 encodes, and what role each domain plays in the protein's overall function (to the extent that either of those things is known, which can vary a lot from gene to gene).

For instance, the deletions mentioned in this article --- exons 5-8 in one person, and exons 2-9 in the others --- include a large block of laminin G domains (exons 5-10) and all three of the discoidin-like (DISC) domains near the end of the (exons 2-4). Both of these groups are on the part of Caspr2 that reaches outside the cell, and are involved in binding to other proteins on other cells to join the two cells together. In the nervous system, the two types of cells likeliest to be joined together are neurons and glial cells, during myelination.

Another domain that's important to Caspr2 function is the PDZ-binding domain at the end of the cytoplasmic half of the protein. That domain binds to PDZ domains on potassium channels while they're free in the cytoplasm and guide them to embed in the cell membrane near Caspr2.

The point mutation described in this article would lead to garbled (or non-)expression of exons 23 and 24, which encode the transmembrane domain (i.e., the part of the protein that is embedded in the cell membrane) and the PDZ-binding domain; absence of those domains from Caspr2 might prevent that protein from clustering the potassium channels near the node of Ranvier.


How common are they?
Most of the mutations described above --- the deletions and translocations --- are very rare, possibly even unique to the individuals or families in whom they were discovered.

However, some of the single-nucleotide polymorphisms (SNPs) --- the alteration of a single nucleotide base --- are fairly common. The polymorphism described in this article, the presence of thymine at a point in a noncoding region of CNTNAP2 where most people have adenine, is thought to occur in 36% of people.

Where did you get your content from on this? My son has this gene deletion, and it's rare. We live in Nebraska.

I have a list of sources at the bottom of the post; I found them by searching for "CNTNAP2" on PubMed and Google Scholar.

I wanted to thank you so much! I have a research project involving these genes and autism, and to be honest with my current level of education I was struggling to understand it at all. You broke it down in such a way that I am able to FINALLY understand a LITTLE bit more. Thank you again.

thank you! I have been doing some research for a paper I am writing, and to be honest, I was very confused. Your blog enabled me to get an understanding of this that isn't PHD level which I am NOT. Thank you so much for this, it allows me to get a basic understanding of what this gene does.