Suzie posted a link to this wonderful website today on Echidne's blog; the site is called Take Back Halloween!, and it's full of cool ideas for Halloween costumes based on powerful female figures from history and mythology.

My favorite costume on that site, so far, is actually one that had occurred to me before as someone it would be cool, and relatively easy, to dress up as: the famous female pharaoh Hatshepsut. 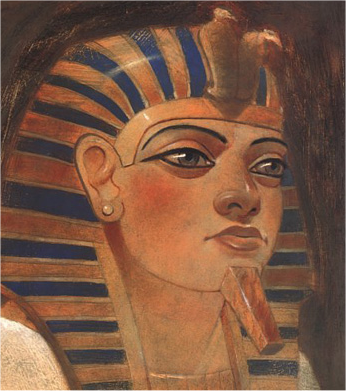 Here's what Take Back Halloween! says about her:

Hatshepsut (ca. 1508-1458 BCE) was an extremely successful pharaoh whose reign was full of accomplishments --- important trade missions, gorgeous architecture, a booming economy. But the thing she's most famous for, at least nowadays, is that she had herself depicted as male on her monuments. There she is, King Hatshepsut, striding across the ancient bas reliefs with her broad shoulders and her beard ... it's a little weird until you understand what's going on. The role of pharaoh was gendered male in ancient Egypt, and Hatshepsut was just assuming the badges of office. She wasn't pretending to be personally male, and the texts unmistakably refer to her as female: "she" is the beloved "daughter" of Amun, destined to rule, and so forth. But Egyptian iconography and religion called for the pharaoh to have a male form, and so Hatshepsut had herself depicted with beard, kilt, the whole bit.

Take Back Halloween! suggests a standard dime-store Egyptian Queen costume, with the stripey headdress of a pharaoh substituted for whatever crown the costume comes with. 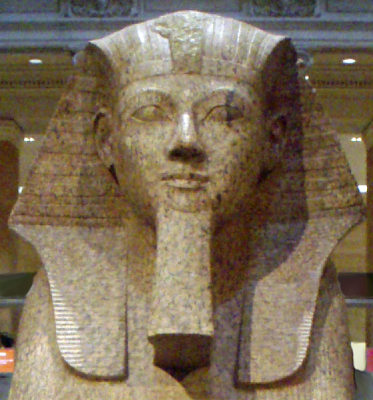 My own idea, when I conceived of a Hatshepsut costume, was to dress as the masculinized "King Hatshepsut" character --- fake beard, stripey headdress, crook and flail, pleated linen kilt, boobs bound down with a strip of the same material I'd used for the kilt. (This would be, obviously, only practical if the weather was warm, or if I was going to wear it to a party or other indoor event. In Kansas, it is usually too cold at night in late October to be running around outside with that little clothing on). 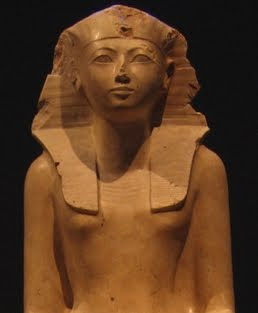 I would also wear a cardboard cartouche around my neck on a string, with (if I could find them) the hieroglyphs spelling Hatshepsut's name painted on it.

Another thing I thought would be fun to add to this costume, to throw a little gamer-geekery into the mix, would be to wear shoes evoking the "Freudian slippers" card from Munchkin, which allow your character in that game to function as whatever gender you say they are, even both at the same time. I thought that would be particularly a propos for Hatshepsut, who is female, but yet also male in her role as Pharaoh.
They also have lots of ideas for mythological-character costumes, which is another area of geekery that is dear to my heart. I was actually just pondering the best way to make a Gorgon costume that wasn't just a bunch of rubber snakes braided into one's hair --- the Gorgons, depending on what version of the myth you're reading, might have talons of bronze, wings of gold, and tusks like a wild boar or hippopotamus, or they might just be scaly and dragonlike; either way, "normal-looking woman with snakes on her head" falls short of the level of fearsomeness required.
Unfortunately, their Medusa costume is just a snake wig and a coat. Blah.
But they've got an impressive array of ancient-goddess costume ideas: there's the winged Egyptian goddess Isis, the Mayan goddess Ix Chel, the Japanese sun goddess Amaterasu, and the Sumerian goddess Inanna. And those are only the goddesses I'd heard of before going to the site!
Posted by Lindsay at 6:29 PM

Belinda the Nobody said...

I never understood those "sexy" costumes. I mean, here it tends to be on the colder side come Halloween, so it just doesn't seem logical. *shrug*
People... are silly.

That website is pretty awesome. I'm planning on being a zombie this year, myself [I blame Dead Rising 2]; but maybe next year the website can help me [I tend to have trouble coming up with costume ideas these days.].

Well, while I adore a good portion of the website, and love the idea, a few of the costumes teeter dangerously close to the unfortunate implications territory. I noticed that on both the web page for the Murasaki Shikibu costume, and the costume of the Shinto deity Amaterasu, the models of the costumes/makeup/wigs were white women. I'm not saying that the costumes are inherently bad ideas, but I think it was in poor taste not to have an Asian model for those costumes. Also, I'm not religious, but I don't particularly like the idea of dressing up as a deity for a religion that is still alive today and has 119 million followers for Halloween, so I don't like the idea of going as Amaterasu for Halloween.
Just my two cents. It's an otherwise brilliant idea, but it could use some tweaking.

Wait, I just noticed they have a disclaimer on their "About" page, urging people to "Use care if you're stepping outside your own cultural heritage". Which is a plus.

Yeah, it's true, there's still the issue of appropriating other people's cultures.

They do address it on the About page, but you're right about it being questionable to dress up as a deity in a religion that's still being practiced.

Thanks so much for the post! We appreciate it.

I just wanted to respond to Leah Jane's comment that "the models of the costumes/makeup/wigs were white women." On the site we're doing our best to point people to products that are readily available at a good price. Obviously we have no control over the models used by manufacturers. In fact, there is a stunning lack of non-white models in the retail world as a whole. We've tried to find products with more appropriate models whenever possible, but most of the time it's just not possible. So we're stuck with the goofy white guy modeling the pharaoh headdress and so on.

As for the cultural appropriation thing, not everybody online is white. Our site is for everybody: Japanese, Iranian, Peruvian, Puerto Rican, etc., etc.

@ Take Back Halloween.
I am aware that Amaterasu is popular in anime and video games. Having a B.A in Asian Studies and Japanese culture helps with that sort of knowledge.
However, it doesn't change the questionable idea of having a goddess of a practiced religion be portrayed in Halloween, especially by a white woman. Just ask Heidi Klum:
http://www.contactmusic.com/news.nsf/story/klum-upsets-hindus-with-goddess-kali-costume_1085503