I was poking around on Etsy when I spotted this: 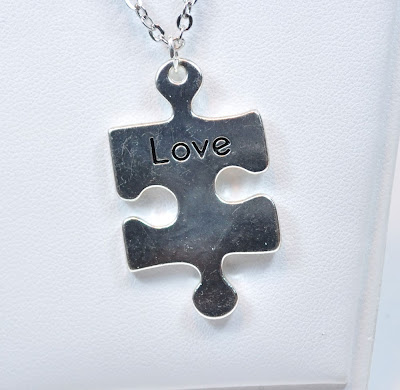 A beautiful puzzle piece inscribed with the word love. This necklace is meant to show support and awareness for autism of all types.

I will be donating 100% of the price of this necklace to Autism Speaks to fund awareness and research.

This annoyed and saddened me, for reasons that will be obvious to anyone who's been following the neurodiversity blogosphere for any length of time.

(If you haven't, here's a brief list of the things autistic self-advocates don't like about Autism Speaks: eliminationist rhetoric*; non-representation/token, non-policy-setting representation** of autistic people within their organization; a poor record of actually providing material help to anyone, even when they've promised to do so; advertisements and "awareness campaigns" that portray autism as a terrible tragedy, and which also portray autistic children as dehumanized burdens on their parents; past endorsement of the wrong and dangerous vaccines-cause-autism hypothesis by the organization's founders; research funding practices that prioritize research into causes of autism while providing little to no funding for research into what kinds of things might help to improve the quality of existing autistic people's lives; a pattern of hostility and/or indifference toward autistic adults who try to engage with the organization; and exploitation and deception of families of autistic children who decide to collaborate with them on "awareness" projects).

It really makes me sad that an organization that does as much harm to autistic people as Autism Speaks does is so well-known and respected. No other autism-related nonprofit comes close to having that kind of name recognition, so you often see well-intentioned people who just want to help autistic people and their families deciding to donate to Autism Speaks, because it's the autism charity they've heard of, and they haven't heard any of our criticisms of it.

I wrote a short, hopefully very nicely-worded message to the other Etsy seller to try and get her to reconsider her decision to donate to Autism Speaks:

I really appreciate you wanting to do something to help out autistic people, but I thought you should know that lots of us have serious problems with Autism Speaks. I know it's the leading autism charity, but many of us in the autistic community feel that Autism Speaks is more interested in ridding the world of people like us than it is in helping us. There are other autism-related charities/nonprofits that are also run by autistic people --- the Autistic Self-Advocacy Network is one --- which might be better places to donate your proceeds if you're interested in showing support for autistic people.

Again, I'm sorry if this sounds angry or critical --- I'm touched by your sentiment, and do think you have only the best intentions. I wouldn't badger you with this if the differences between my community and Autism Speaks were any smaller or less bitter.

Thank you for reading, and for your consideration.

When I was writing it, though, I failed to come up with any other autism charities or nonprofits that are run by and for autistic people other than ASAN, which annoys me because a) there are quite a few, with differing emphases, and b) some autistic people think ASAN is problematic, too.

So, here are some of the other, more autistic-people-friendly autism organizations:

... and here are some cross-disability organizations:

The National Council on Independent Living

EDIT 4/14: There are a couple of other organizations I want to mention, too: Autistics.org (which Meg Evans suggested in comments) and NOEWAIT, the National Organization to End the Waitlists, which is dedicated to improving access to support services for all developmentally disabled people.

*This should really be its own post, but here are a few examples: a video released in 2006, "Autism Every Day," included a scene in which then-Senior Vice President Alison Tepper Singer (who has since resigned from Autism Speaks over the vaccine issue) speaks about a fantasy she had of driving her car off a bridge with her autistic daughter and herself in it, and about how the one thing that prevented her from acting on it was her desire not to leave her normal daughter an orphan; a documentary called "Autism: True Lives" included a similar scene in which Harry Slatkin, husband of Autism Speaks board member Laura Slatkin, talks about both worrying and also almost hoping their autistic son might fall into a pond in their backyard and drown; a statement in Parade magazine by Autism Speaks co-founder and board member Suzanne Wright that their goal is to "eradicate autism for the next generation"; and innumerable video spots comparing autism to various terminal illnesses like cancer and AIDS, or to catastrophic, life-threatening events like car crashes, lightning strikes and kidnappings.

**While I think their addition of John Elder Robison for having no autistic board members --- other self-advocates are more cynical, and don't think anything will come of it. (See Sarah, ABFH, Clay, and also John Elder Robison's own assessment of his role on Autism Speaks's scientific advisory board).

I think the seller will appreciate your message. It's nicely worded and very informative.
And let me say, I love ADAPT. I work with the founders of ADAPT's Montana branch, and they are incredible people all around.

Thanks for linking to my post about JER, I had forgotten about it. I still don't have anything against him, really, just not confident that he will do much for us.

Autistics.org deserves to be on a list of self-advocate groups that are worthy of donations; it's been around for a long time and inspired many people to get involved.

I'd like to make clear that ASAN does not have, and never had, any expectation of receiving all donations from autistic-friendly people -- we're glad to see others in our community get recognition and support too.

"ASAN does not have, and never had, any expectation of receiving all donations from autistic-friendly people ..."

Oh, I didn't think you did! I just wished I could've remembered more organizations at the time, so that I could've listed them along with ASAN in the e-mail.

Autism Speaks mainly deals with more severe cases of Autism. I doubt they have AS in mind when they speak of curing Autism. And ASAN does not speak for all people with AS, let alone more severe cases. I fear the ND movement has become more of a cult of personality than a respected movement. It's not as if the National Disability Counsel held an election and we all voted them in. It seems that Ari Ne'eman is using his Asperger's diagnosis-and exploiting anyone who bears that label-to further his political aspirations and you would be blind not to see through it.

The ND movement is commonly stereotyped as being only for those who are "higher-functioning", yet ASAN has board members who are unable to speak verbally.

While I agree that Ari can certainly be a controversial figure, I feel that since he is Autistic himself, he understands the Autistic experience better than any neurotypical. He and I may not know what it is like to be non-verbal, but we do know how it feels to live as an Autistic person in an NT's world.

Anon, I agree with you that ASAN isn't all-representative --- that's why I was disappointed that it was the only by-autistics-for-autistics-type organization I could think of at the time.

There are so many others that are just as good, and that might even be better at representing/advocating for people with more severe disabilities. (TASH is one that I can think of, and NOEWAIT is all about improving access to support services, which is probably a higher priority for autistics with more severe disabilities who can't live on their own without such supports).

I have no reason to mistrust Ari (I like him, based on the relatively little I know of him), but I can understand your fears about ND becoming more about prominent personalities than about truly representing all autistic (or otherwise non-neurotypical) people; that seems like a common problem in politics.

That said, Laura makes a good point that ND in general, and ASAN in particular, isn't as restricted to academically gifted, verbal, relatively independent Aspies as it's often portrayed as being.

Anyway, no, it wasn't my intent to portray ASAN as the One True Organization for Autistic People --- I know there are autistic people it doesn't speak for. That's why I included all those other organizations in the post, and I wish I had thought to include them in my letter to the other Etsy vendor.

Thanks Lindsay
I am skeptical about anyone in power these days. I shouldn't judge Ari since I don't know him in person and don't know his motives but I think it is wrong to assume he are genuine simply because he has AS. Plenty of people use their respective backgrounds to get others' of that same background to back them in elections or to buy their products.

In addition to being a marketing scheme, ND movement also creates a cult of personality regarding AS. In doing so, they not only undermine the diversity that exists among those on the spectrum, they also confine us to that particular label just as so called professionals have done with us our entire lives. I like to think of myself as a complex human being, not a textbook definition and I hope you feel the same way.