Yes, I did say I had two wacky 1930s book ads to show you. You're not going crazy. It's just that I ended up spending a lot more verbiage than I had planned for (as usual) on the first one, so I thought I would break it up into two posts.
Here's other one, from the same magazine: 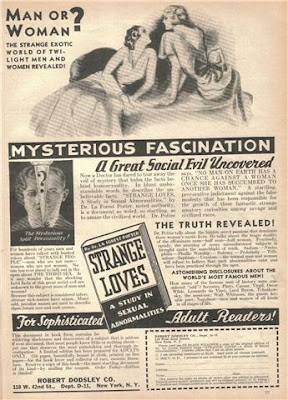 This time, the book being hawked is titled "STRANGE LOVES: A Study in Sexual Abnormalities." For sophisticated adult readers only, which is a slightly stricter criterion than "Sex Harmony and Eugenics" came with --- that one, they only would not ship to children. No sophistication required, as long as you were of legal age.

I am sorry I wasted the word "purple" on the copy describing "Sex Harmony and Eugenics," when it's now clear to me that that writing couldn't hold a candle to what's in this ad.

(I'd adjust my appraisal, and say that the copy in the earlier ad was merely "lavender," if that word with its more recent historical connotations were not so perfect for this ad).

For hundreds of years men and women have talked with hushed voices about "STRANGE PEOPLE" --- men who are not men --- women who are not women. No one has ever dared to talk out in the open about THE THIRD SEX. Is it any wonder that the shocking lurid facts of this great social evil are unknown to the great mass of men and women? 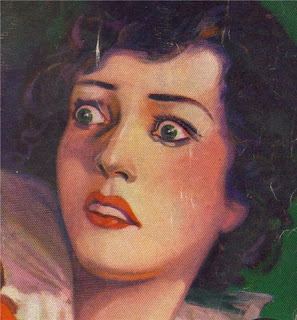 The terms used here, besides being more reminiscent of a carnival barker's spiel than an academic or medical treatise (that's another thing about these old ads --- get a load of the absolute authority given to doctors!), are very confusing. Sometimes the copy seems to refer to gay men and lesbians, sometimes to intersexed people, sometimes to transpeople, and sometimes merely to men or women who do not act sufficiently masculine or feminine.

I imagine that in the author's fevered imagination, these categories overlap one another considerably. 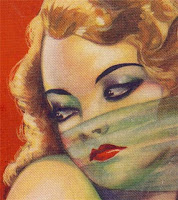 uality. In blunt understandable words he describes the unbelievable facts. "STRANGE LOVES: A Study in Sexual Abnormalities," by Dr. La Forest Potter, noted authority, is a document so weird, so startling, as to amaze the civilized world. Dr. Potter says, "NO MAN ON EARTH HAS A CHANCE AGAINST A WOMAN ONCE SHE HAS SUCCUMBED TO ANOTHER WOMAN." A startling, provocative indictment against the false modesty that has been responsible for the growth of these fantastic strange amatory curiosities among savage and civilized races.

Look, there's false modesty again! This is an interesting aspect of early 20th-century American culture, with its pop Freudianism and its emphases on hygiene and on scientific homemaking and childrearing. The same deep fear and loathing of sex (and of women in general) still lurks underneath the modernized surface; it's just that, now, sex outside of procreative sex within marriage isn't sinful so much as unhealthy.

It's a bit dizzying to consider how the blame for "deviant" sexual practices has shifted over the centuries. You've got the medieval conception of woman as sensual, easily tempted Eve whose insatiable sexual appetite had to be carefully safeguarded by her father and husband; you've got the Victorian "angel in the house" who is ethereal, unworldly and entirely asexual, but whose duty it is to provide her husband (who is now the insatiable animal but, curiously, is not subject to strict control by the women in his life) with a suitable sexual outlet, lest he fall in with Bad Women who will lead him into utter dissolution; and now, with this hygienic, pop-Freudian conception of sex, it is repression of normal sexual development which leads to morbid fascination and unusual appetites.

(On a sillier note, I absolutely love the all-caps "NO MAN on EARTH has a CHANCE against a woman" --- why against? shouldn't it be with? --- "once she has succumbed to ANOTHER WOMAN!" I love the idea that lesbians are lurking out there in some dingy opium den or back alley, waiting to tempt some innocent straight girl from the path.)

"For hundreds of years men and women have talked with hushed voices about "STRANGE PEOPLE" --- men who are not men --- women who are not women. No one has ever dared to talk out in the open about THE THIRD SEX. Is it any wonder that the shocking lurid facts of this great social evil are unknown to the great mass of men and women?"

Ahaha, great social evil? I am loving (and also kind of hating because I'm uncomfortably aware whoever wrote this was probably actually being very serious) the piled-high hyperbole here.

Great social evil, because they don't be masculine or feminine "enough"? I'm pretty glad I did not live in such a time. I don't think I'm a "great social evil" just for being kind of androgynous (both in appearance and actions/personality).