I discovered these two articles by reading about them in the Kansas City Star (here and here --- the latter article was a reprint from the Boston Globe, so I'm linking directly to the Globe story). Though they deal with very different subject matter --- the neurochemistry of social behavior in locusts vs. the ability of honeybees to recognize different quantities of objects --- and with very different insect species --- the honeybee is an intensely social insect that lives in a huge, highly ordered society in which each individual plays a specialized role, while the locust can switch between solitary and swarming states --- I have decided to blog about these articles together because each one highlights an instance of a very simple organism doing something that requires a lot of cognitive and behavioral flexibility. 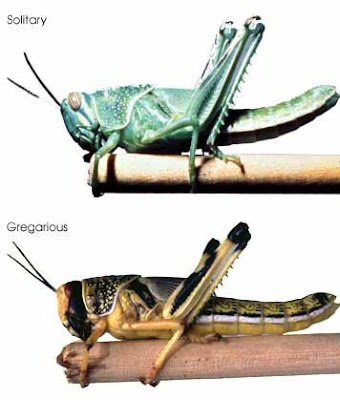 Desert locusts are either solitary or gregarious* depending on how many locusts are in a given area. When they perceive (either by sight and smell or by touch**) a certain critical density of other locusts around them, they undergo metabolic and behavioral changes, such that they move in unison, eat large amounts of food, and breed prolifically.

To determine what role --- if any --- the neurotransmitter serotonin played in bringing about this switch between forms, Michael Anstey and colleagues took two populations of desert locusts, one kept in a solitary state and the other kept in a gregarious state, and, having made note of sufficient behavioral markers to devise quantitative indicators of which state the bugs were in (e.g., by measuring their walking speed, the proportion of time they spent without moving, the proportion of time they spend near other locusts, and the proportion of time they spent grooming one another), they used one of several methods (crowding, exposure to the sights and smells of other locusts without touching them, pressure on the back legs, and direct electrical stimulation of the nerves in the back legs) to trigger the change from the solitary to the gregarious state. After waiting a set amount of time (0, 1, 2 and 4 hours for each condition), they froze the locust, dissected out its thoracic ganglia and subjected the extracts of those tissues to reverse-phase high-performance liquid chromatography. From the time it took the extract to travel through the column, they were able to determine the approximate concentration of serotonin.*** In the next phase of testing, they altered the serotonin levels of solitary locusts (by injecting them with a mixture of several different serotonin blockers, with an inhibitor of serotonin synthesis, with a mixture of serotonin-receptor activators, and with a crucial serotonin precursor, as well as by exposing the thoracic ganglia and applying serotonin directly to them) and then observed their behavior, looking for a relationship between increased social behaviors and higher serotonin levels.

They did find such a relationship: when the gregarious state was induced by any of the sensory means described above, the most gregarious-acting individuals had the highest serotonin levels:

We crowded solitarious locusts for 0, 1, or 2 hours to generate the entire gamut of behavior, from solitarious to gregarious (Fig. 2A). The amount of serotonin was significantly positively correlated with the extent of gregarious behavior across this entire range (analysis of covariance, 5-HT loge transformed; F1,35 = 21.817, r2 = 0.429, P <> Locusts that behaved the most gregariously (Pgreg > 0.8) had approximately three times more serotonin (12.78 ± 1.85 pmol; mean ± SD, n = 10 locusts) than more solitariously behaving (Pgreg < n =" 7">Furthermore, the amount of serotonin only corresponded with the degree of gregarization but not the duration of crowding, per se (F3,35 = 1.218, P = 0.318). (italics and emphases mine)

The locusts treated with the various serotonin agonists and antagonists (or, in each case, a saline solution) were also presented with the sensory stimuli that had just been shown to be effective in changing solitary locusts into sociable ones. These results also demonstrate a crucial role for serotonin: when put into crowded spaces or allowed to see and smell other locusts, solitary locusts injected with the serotonin antagonists tended to stay solitary. Conversely, solitary locusts treated with serotonin (or its precursor, 5-hydroxytryptophan, or the various serotonin-receptor-activating compounds) switched to the gregarious form without any exposure to those sensory stimuli.

This graph (taken from Anstey et al.) shows the effect of various serotonin-suppressing chemicals on the proportion of locusts entering the gregarious stage when confronted with sensory stimuli normally associated with high levels of crowding --- pressure on the legs or the sight and smell of other locusts.

This second graph (also taken from Anstey et al.) shows the effect of the various serotonin-boosting chemicals on locust social behavior, both in the presence and absence of crowded conditions.

Here are some of the researchers' conclusions about how this works in the wild:

Serotonin and other monoamines have been implicated in changing behavior after social interactions in a number of contexts, including intraspecific aggression, status, and courtship in many species, including crickets (25), crustaceans (26, 27), and rats (28). All of these interactions, including behavioral gregarization in locusts, require the interpretation of complex signals from conspecifics leading to long-lasting changes in the way individuals interact during future encounters. Behavioral gregarization therefore resembles memory formation, with specific sensory experiences altering future behavior; in the case of locusts, this entails a suite of changes that creates an integrated behavioral phenotype adapted to a changed biotic environment. Locusts that have been reared gregariously for many generations have lower titers of serotonin than long-term solitarious animals, (12) which strongly suggests that gregarious behavior is not maintained by a long-term serotonergic modulation of neuronal circuits. Furthermore, solitarious behavior is acquired more slowly on the isolation of long-term gregarious phase locusts (8) than gregarious behavior is acquired by solitarious locusts, implying that gregarious behavior becomes more ingrained during prolonged crowding.

So it looks like Anstey et al. have discovered only the tip of the locust-socialization iceberg: while the initial shift to the gregarious form appears to follow the model they've laid out, with the perception of a lot of other locusts triggering a rush of serotonin, which triggers the transformation (which they explain in terms of altering the locusts' basic reaction to other locusts: are they attracted or repelled?), persistence of the gregarious tendency across generations seems to depend less and less on the activity of serotonin.

One thing these findings leave me wondering is whether serotonin has a similar effect on human sociality independent of its well-publicized effect on mood. Depressed humans tend to withdraw from other humans; is that only because they feel bad, or is it because the primary neurochemical culprit in depression --- a shortage of available serotonin --- also independently affects sociability? For that matter, you could probably ask the same questions about sleep. Do we sleep poorly when depressed because our gloomy thoughts keep us awake (or, alternately, sleep excessively because our feelings of hopelessness sap our energy), or do our sleeping habits get disrupted because the scarcity of serotonin is throwing our circadian rhythms out of whack? Is it possible to uncouple emotional state from the physical symptoms of depression?

This has gotten really long, so I will split it into two posts, and write about honeybees tomorrow.

*The desert locust's scientific name is Schistocerca gregaria, which suggests that, when the species was named, scientists only knew about the gregarious --- swarming --- behavior pattern in these insects. I can imagine they'd be a lot more conspicuous in a huge group than they are individually!

**In the locust, the central nervous system is split into several clusters of ganglia: The brain receives signals from the eyes and antennae, while the three thoracic ganglia receive tactile information from the nerves in the legs. Any of these processing centers may be the starting point of a signaling cascade.

***Serotonin being a relatively polar molecule, I would imagine that a greater proportion of serotonin in the nerve-cell extract would translate into a shorter elution time.

i always loved these stories... have u heard about the fish who live in banks and when the male dies, the alpha females changes gender and becomes the male? (one of my favorites...) anyway, i've always wanted to believe that it's both biology and society (not one or the other). but in the end, it does come down to a belief, at least given our modern research paradigm, which cannot account properly for both. a belief which frames the research you do, makes u look for particular things and investigate particular relations you 'notice' based on ur belief.

I recently came across your blog and have been reading along. I thought I would leave my first comment. I don't know what to say except that I have enjoyed reading. Nice blog. I will keep visiting this blog very often.

Rather interesting blog you've got here. Thanx for it. I like such themes and everything connected to this matter. I definitely want to read a bit more on that blog soon.